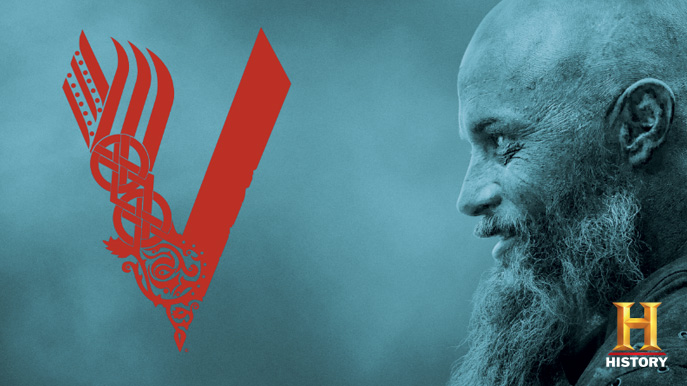 Vikings, the critically acclaimed historical drama on History, returns for its fourth season with all-new episodes starting December 1 at 9:00 pm.

The series, inspired by the tales of exploring Norsemen of early medieval Scandinavia, follows the exploits of legendary Viking chieftain Ragnar Lothbrok (Travis Fimmel) as he leads his army of Viking warriors in daring raids and conquests of most of England and the rest of the modern world. With the help of his brother Rollo (Clive Standen), Ragnar has amassed a great deal of fortune no Viking could ever imagine. But his ambition has also made enemies on all sides that will put the future of his family and his people in grave danger.

In the midseason premiere, Ragnar returns to Kattegat to handle unfinished business in Wessex with King Ecbert (Linus Roache). A face-off between Ragnar’s ex-wife Lagertha (Katheryn Winnick) and his second wife Aslaug (Alyssa Sutherland) becomes imminent as both attempt to plot themselves back into power. In Paris, Rollo prepares for the eventual return of his brother as he tries to build a relationship with his new wife, Princess Gisla (Morgane Polanski). In Wessex, Ecbert grows closer to his son’s wife, Judith (Jennie Jacques), while his son Aethelwulf (Moe Dunford) forms a relationship with Queen Kwenthrith (Amy Bailey) of Mercia. King Harald Finehair (Peter Franzen) arrives in Kattegat with his brother Halfdan (Jasper Pääkkönen), to return with Ragnar to Paris. However, Harald has desires to become the King of all Norway, but must overthrow Ragnar to do so. Not keen in following his father’s wishes, Ragnar’s eldest son Bjorn (Alexander Ludwig) prepares to sail to the Mediterranean in an innovative new boat built by Floki (Gustaf Skarsgård).

History not yet in your plan?
Choose to add History to your SKYcable basic plan via SELECT for only Php 50/month in Standard Definition or HD.
GET History HD  GET History SD

Vikings Season 4 Returns With New Episodes on December 1 at 9pm, Same Day Telecast As The U.S.
Welcome, SKY Kapamilya!
We use cookies to improve your browsing experience.
Continue to use this site means you agree to our use of cookies
Tell me more!
×