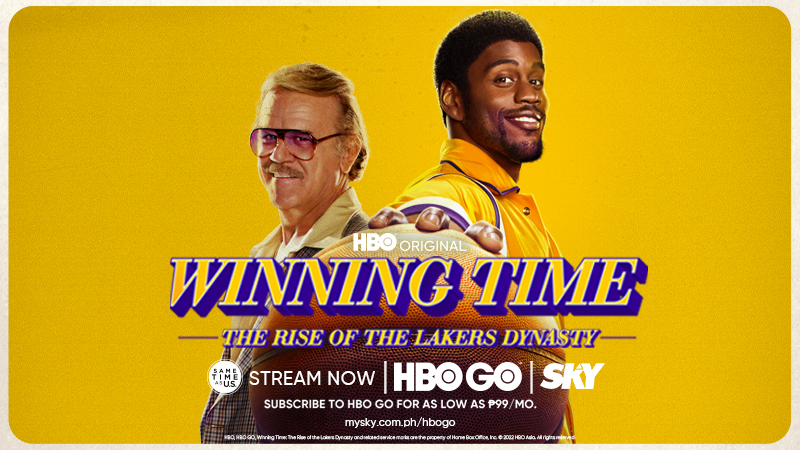 It's showtime for Pinoy hoops fans and especially Lakers supporters as SKY brings HBO's newest sports drama series chronicling one of the world’s most popular basketball teams in "Winning Time: The Rise of the Lakers Dynasty," premiering exclusively on HBO and HBO GO starting March 7 (Monday), 10.00am, same time as the US on HBO, and will be available to stream on HBO GO.

Based on the book "Showtime: Magic, Kareem, Riley, and the Los Angeles Lakers Dynasty of the 1980s" by New York bestselling author Jeff Pearlman, the ten-episode HBO Original series executive produced by award-winning filmmaker Adam McKay depicts the iconic rise of the Los Angeles Lakers as the most dominant and revered basketball dynasty in the '80s.

Relish some of basketball history’s greatest years and stars in "Winning Time: The Rise of the Lakers Dynasty," beginning March 7 at 10 AM the same time as the US, with a same-day encore at 10 PM on HBO via SKYcable (SD Ch. 54 and HD Ch. 168 in Mega Manila; SD Ch. 402 and HD Ch. 710 in regional areas). Following its premiere, new episodes will air every Monday at 9 AM.

Fans can also stream the series on-demand on HBO GO, also available via SKY subscription for as low as P99 a month.

Existing SKYcable subscribers with an HBO PAK subscription can automatically enjoy HBO GO at no extra cost. To learn more on how to avail, visit mysky.com.ph/hbogo.

Relive the Los Angeles Lakers' rise to basketball greatness
Welcome, SKY Kapamilya!
We use cookies to improve your browsing experience.
Continue to use this site means you agree to our use of cookies
Tell me more!
×