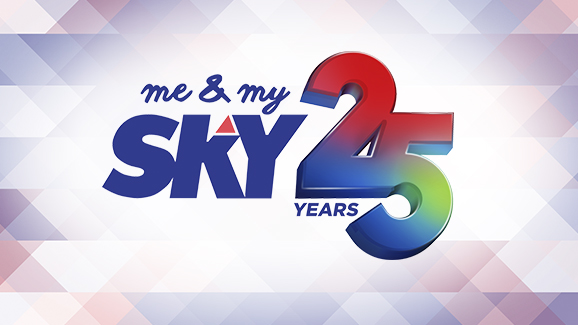 Entertainment and information technology has rapidly evolved throughout the years in keeping with the changes in modern lifestyle. SKY has always been at the forefront of bringing the best and most innovative services that helped Filipinos keep up with the rest of the world.

Beyond the advancements in entertainment technology, there is nothing more worth celebrating than the joy and life-changing moments that entertainment brings to every Filipino home – this is what SKY is truly proud to deliver. Through its vast content offerings, SKY has opened up a whole new realm of possibilities to Filipino viewers, both young and old, men and women from all over the nation. SKY has allowed Pinoys to travel to places farther than their imagination, to get a taste of other cuisines, to understand the plight of people on the other side of the globe, to be taught by experts, to achieve wellness beyond their regular exercise routine or to be at the center of the action of an international sporting event. These shared moments between SKY and its subscribers form a bond that cannot be easily broken. They are personal and irrefutable.

This was the central rallying message delivered by the leadership team of SKY Cable Corporation, during its Employees’ General Assembly held at the Eton Centris in Quezon City last April 14, 2015. The event was attended by all employees from SKY’s Mega Manila operations and had simultaneous general assemblies happening in key regional areas, including Cebu, Davao, Baguio, Bacolod and Iloilo. During the event, the new SKY corporate campaign, headlined as, “Me and My SKY,” was launched. The new campaign takes inspiration from the realization that SKY has made a meaningful difference in people’s lives on a personal level. As SKY Chief Operating Officer, Rodrigo Montinola, said during SKY’s employee general assembly held last April 14, “…different strokes for different folks but only one thing is common - SKY somehow made things better.”

The 60-second TV commercial uses a shortened version of an original song especially created for SKY and shows different characters from SKYcable’s local and foreign programs that interact and blend with the subscribers’ normal activities. Some memorable scenes are those of a regular guy seemingly having a movie date with Julia Roberts from the movie “Nottinghill,” or a lady having a selfie with Novak Djokovic as he is raising his Wimbledon championship trophy. Who can forget that adorable little boy doing a fist bump with Linda of the animated film “Rio” or the grandfather doing magic tricks with Dolphy as an audience? There was also a teenager belting it out to the delight of Blake Shelton of The Voice and a beautiful debutante dancing with Gene Kelly from the classic, “Singin’ in the Rain.”

Check the SKY website regularly for updates on upcoming activities and promotions that will aim to tighten bonds between SKY and its subscribers.

There is nothing more worth celebrating than the joy and life-changing moments that entertainment brings to every Filipino home. In the past 25 years, this is what SKY is truly proud to deliver. Thank you, Kapamilya for allowing SKY to share in your life's journey.
Welcome, SKY Kapamilya!
We use cookies to improve your browsing experience.
Continue to use this site means you agree to our use of cookies
Tell me more!
×