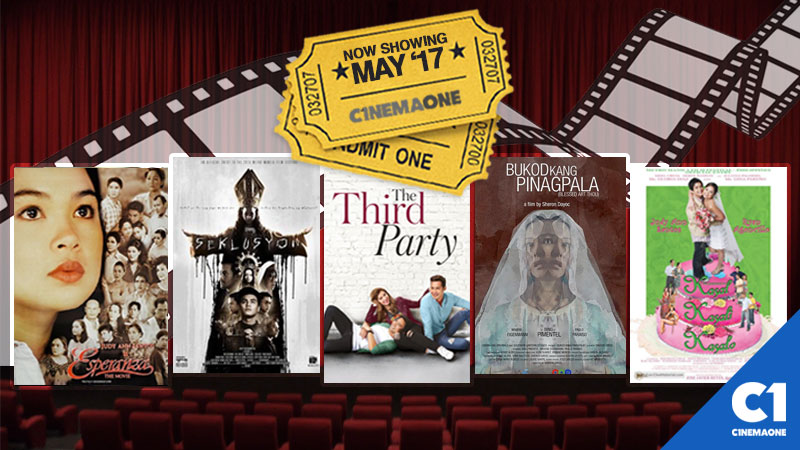 Blockbuster Filipino films on Cinema One every Sunday 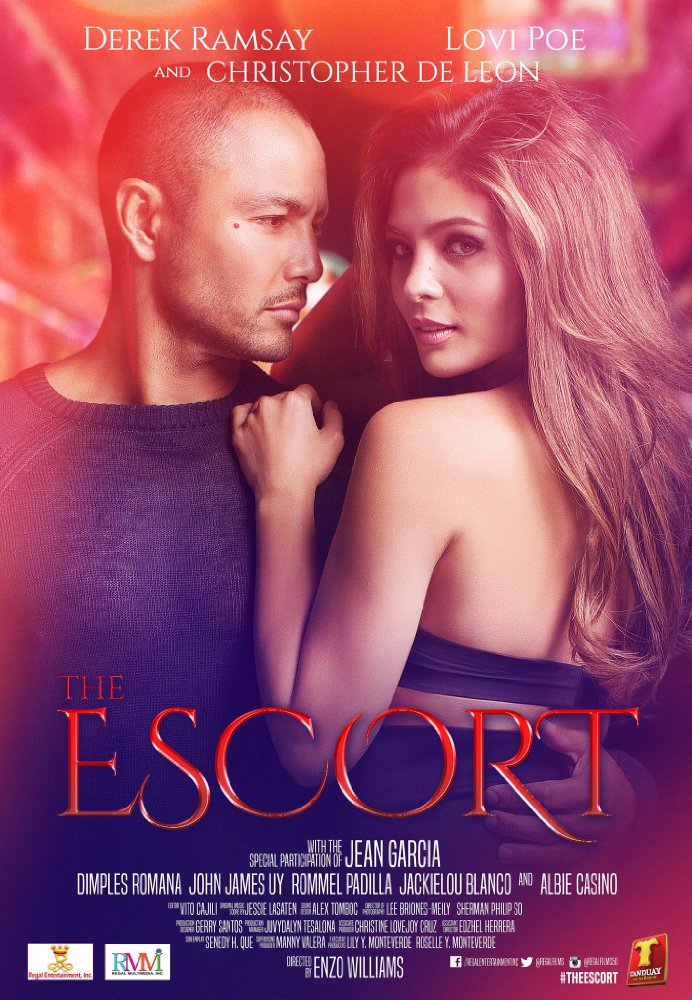 Cast: Derek Ramsay, Lovi Poe
A young woman works as a secretary for a high-class escort service, and is drawn into the intrigues of a client and the man who has fallen in love with her. 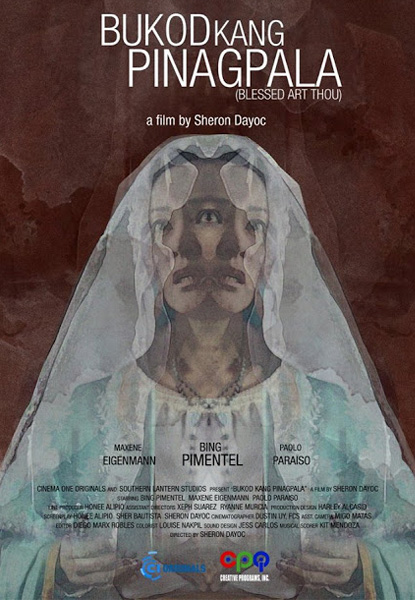 Cast: Bing Pimentel, Max Eigenmann, Paolo Paraiso
The already strained relationship between a religious fanatic and her young daughter takes a turn for the horrific as the intrusion of a mysterious figure into their lives puts them both in peril. 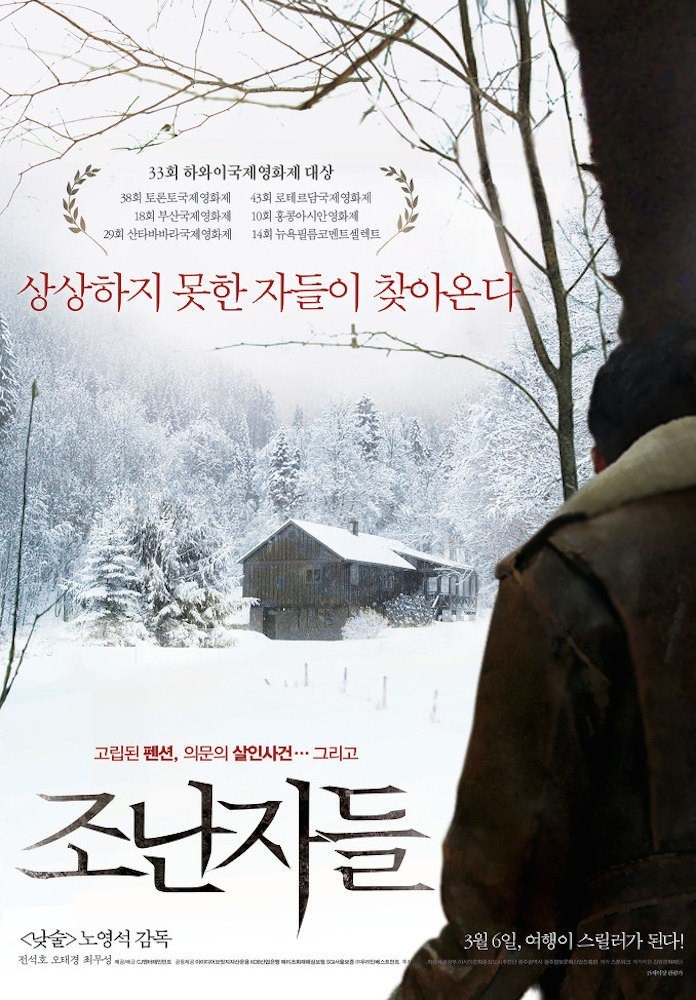 Cast: JUN Suk-ho, OH Tae-kyung, CHOI Moo-soung
Sang-jin heads into a rural mountainous village to finish off a screenplay in peace. On his way, he meets an overzealous local named Hak-su, who insists on helping him. While making small talks, Hak-su lets it out that he was recently released from prison making Sang-jin quite uncomfortable. After setting into the beautifully isolated, closed down B&B, various unexpected characters pass by the place including Hak-su. Upon finishing his screenplay, Sang-jin comes out for fresh air only to find dead bodies around the B&B. 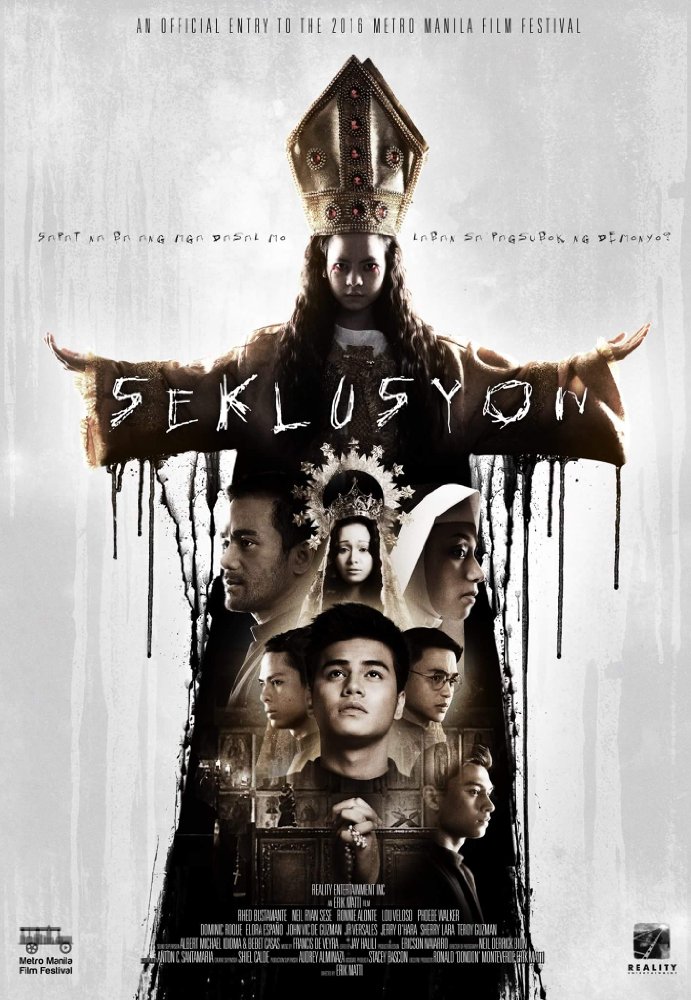 Cast: Phoebe Walker, Elora Espano, Rhed Bustamante
The movie is set in the 1940s and is about a ritual of seclusion where new priests in training confine themselves in a retreat. Secluded in the retreat house, they are now left to confront their inner demons and the arrival of a nun and a child. 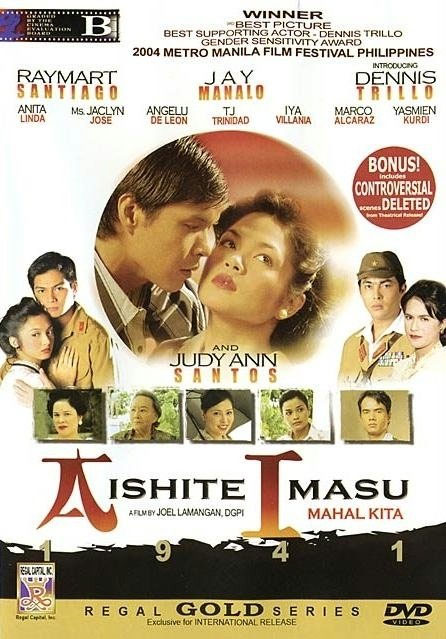 Young Ignacio (Dennis Trillo), maltreated by his drunkard father, is adopted by Melba (Jacklyn Jose), the aunt of his playmate Virginia (Judy Ann Santos). Ignacio and Inya grow up together with another friend Edilberto (Raymart Santiago). In their adolescence, both Virginia and Ignacio, who turns out to be gay, fall in love with Edilberto, who later marries Inya. During the Japanese Occupation, a Japanese Capt. Ichiro (Jay Manalo) falls in love with the gay Ignacio who masquerades as a woman and assumes the name Inya while Edilberto joins the guerilla movement and solicits Ignacio alias Inya to spy on the atrocious enemy. Ignacio enjoys some immunity being the beau of a Japanese officer, but is in constant fear of being discovered, though it comes out later that Capt. Ichiro has fallen in love with the real Ignacio as a man. Then Ignacio fails to deliver information and the guerillas thought he has sold out his own people. 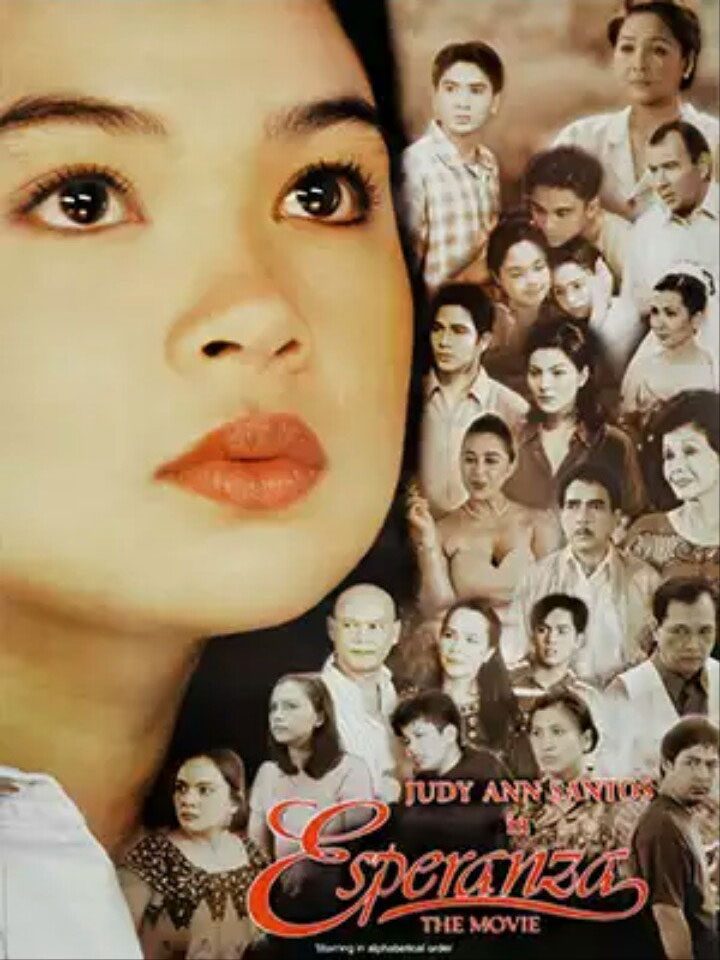 Cast: Judy Ann Santos, Wowie, de Guzman, Piolo Pascual
A tangled yarn of tragic circumstances starts when Juan Salgado (Dante Rivero) disowns his illegitimate daughter with a prostitute. Juan’s wife, the compassionate Isabel (Charo Santos), searches for the renounced child but loses all her three children in a bus accident while Juan is in Saudi Arabia. The eldest of the brood is Socorro given the name Esperanza by the good-hearted Raul (Joel Torre) who adopts her with his oppressive wife Cecilia (Sylvia Sanchez). The boy Rafael is renamed Danilo by his foster parents Luis and Ester who have a son Noel. Regina the youngest becomes Cecile and grows up with the rich but wicked Mayor Montejo (Lito Legaspi). Isabel falls into the custody of Dr. Jaime Illustre (Tommy Abuel) who drugs her and keeps her in the dark for years for his own selfish motive. Through Esperanza’s endeavors, the estranged siblings are gathered together and strive to find their father Juan who is now married to Isabel’s half-sister Sandra (Elizabeth Oropesa). Sandra is the reason for half their troubles as she usurps the wealth of their grandmother Doña Consuelo (Rosa Rosal). Through the orchestration of Rosella Salgado (Carmina Villaroel), who is now Atty. Cynthia Salazar, the family is reunited to exact retribution for the injustices she suffered as a deprived child. 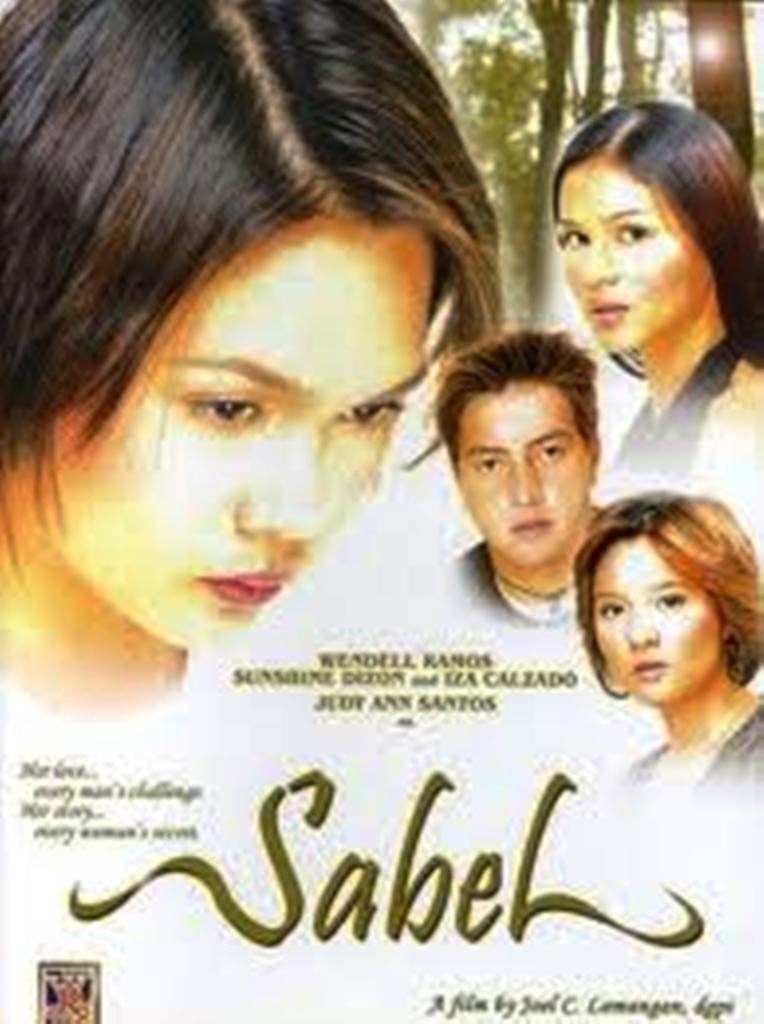 Cast: Judy Ann Santos, Iza Calzado
Sabel (Judy Ann Santos) is an enigmatic woman who even in her childhood had temper tantrums. Sabel seems to have an inner turmoil that needs venting. Interviews with different people give contradicting portraits of the woman. Sabel’s ex-boyfriend’s say she is wild in bed; she seems to act without reason that even her father confessor is confounded. As an apostolic nun, she is tireless and popular among hardened criminals. Jojo (Wendell Ramos), an unjustly accused prisoner, rapes Sister Sabel on her last day of work in jail. Falling obsessively in love, Jojo searches for Sabel when he got out. For a season they live-in together, then one day Sabel is gone without a trace. Out of revulsion, Sabel kills an oppressive man in the Mountain Province but is acquitted for lack of evidence. Sabel finds what she is looking for among the ethnic tribes and a lesbian companion. 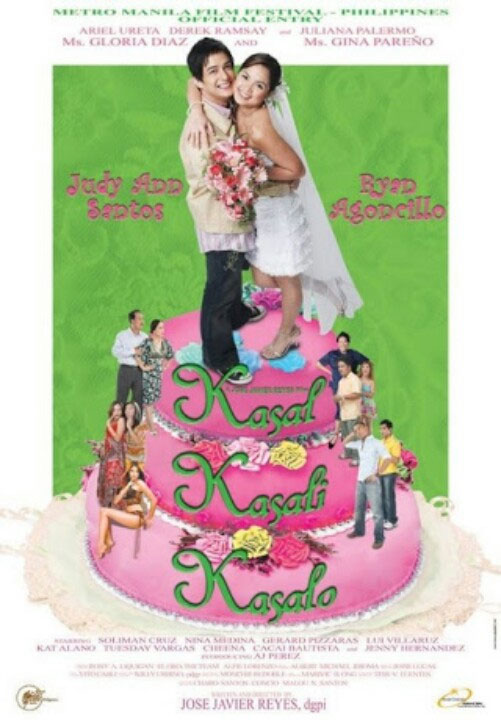 Cast: Judy Ann Santos, Ryan Agoncillo
Angie (Judy Ann Santos) and Jed (Ryan Agoncillo), both career persons, are drawn together and eventually get married. For so many reasons, they live with Jed’s parents and Angie has to contend with their incursions until Jed is persuaded to have their own house. But there are still in-laws to consider, like Angie’s loud and provincial mother (Gina Pareno). When Angie gets pregnant, she becomes self-conscious and moody while Jed, on the other hand, is tempted to flirt with another woman. 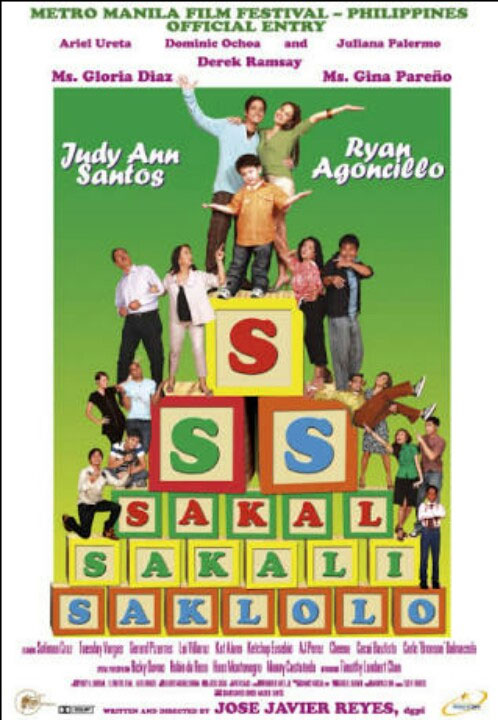 Cast:Judy Ann Santos, Ryan Agoncillo
In spite of their heavy schedule, couple Jed (Ryan Agoncillo) and Angie (Judy Ann Santos) always fuss over their nine-month-old baby boy Rafa (Timothy Lamber Chan). Angie pores over parenting books and insists on both of them to spend bonding time with their over protected son. Both Jed and Angie try to please their own obtrusive and demanding mothers who are not very cordial with each other. Jed’s hypochondriac mother Charito (Gloria Diaz) thinks she is dying that Jed has to spend more time with her. Angie’s separated and tactless mother Belita (Gina Pareño) runs for councilor in their province and almost gets married to her balikbayan boyfriend Douglas (Freddie Webb) to Angie’s dismay. When Jed and Angie finally agree to travel and have a delayed honeymoon, they choose to leave Rafa with their friend rather than to either of his grandmothers.
JUDY ANN SANTOS ON MUST- SEE MOVIES 5:00 PM

BABE, I LOVE YOU

Cast: Sam Milby, Anne Curtis
Nico (Sam Milby), a highly regarded university professor nominated to be vice dean, is mugged but is saved by promo girl Sasa (Anne Curtis) who hits her car on a barrier in the process. However, Nico does not appreciate the help and will not pay for the damage on Sasa’s car. Yet he inadvertently leaves his wallet behind, enabling Sasa to trace him to his university the next day where she causes a scandal. Realizing that Sasa suffered a whiplash from the incident and needs to be brought to the hospital, Nico feels guilty and offers to drive Sasa. But Nico gets annoyed to find out they are going out of town where he leaves Sasa behind. Stranded by a storm, Nico goes back and takes shelter with Sasa overnight. The two become friends and sweethearts, causing Nico to neglect his presentation. They bump into Nico’s mother and sister who invite Sasa to her birthday celebration where Sasa’s ex-lover Bobby’s (Ricardo Cepeda) wife makes a scene. Nico is disheartened while Sasa, who feels she is not good enough for Nico, avoids him and enrolls in college. Will they ever see each other again? 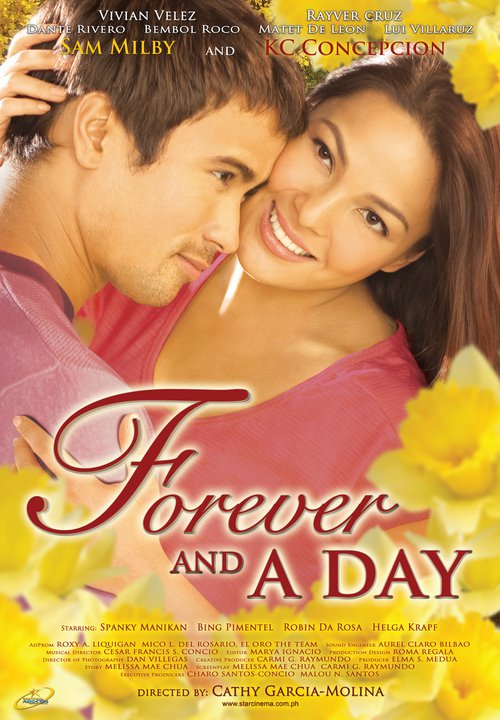 FOREVER AND A DAY

Cast: Sam Milby, KC Concepcion
Euge (Sam Milby) is a self-centered running shoe designer who remains loveless because his shoe is his love and girlfriend. But Euge’s new shoe design is so expensive to produce that it has gone over the budget, resulting into an argument with the company president (Dante Rivero) who suggests he take a break. Euge takes a vacation with his couple of friends at a challenging sport resort where he meets dazed Raffy (KC Concepcion) at the zip line wearing his old shoe design. Euge makes fun of Raffy until he sees that Raffy is terrified of crossing the timber bridge so up hanging high in the air. Euge coaches Raffy until she makes it and falls into his embrace, breaking the ice between them. They become close, but just when Euge has fallen for Raffy, she walks away before she too falls in love with Euge who demands an explanation. He learns that Raffy is dying of lymphoma and that Raffy has grown weary of going into treatment. But Euge rallies her to fight and will not let Raffy go. 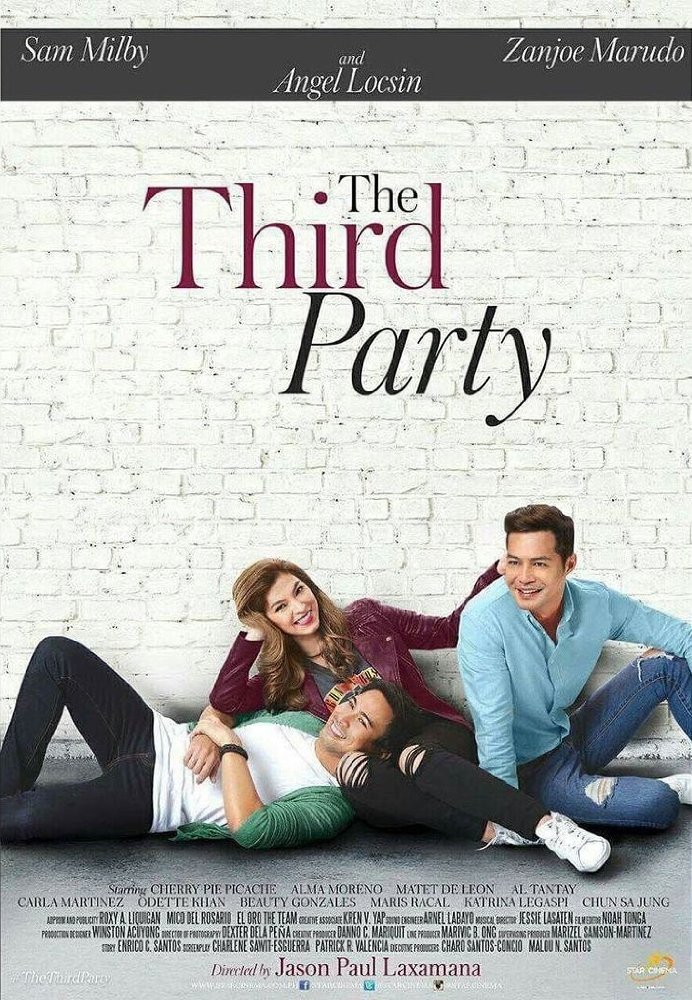 Cast: Sam Milby, Angel Locsin, Zanjoe Marudo
“The Third Party” tells the complicated relationship of Andi (Angel Locsin) with her ex Max (Sam Milby), and his present boyfriend Christian (Zanjoe Marudo). What will happen when they find themselves in a situation where they have to constantly be in each other's radar? 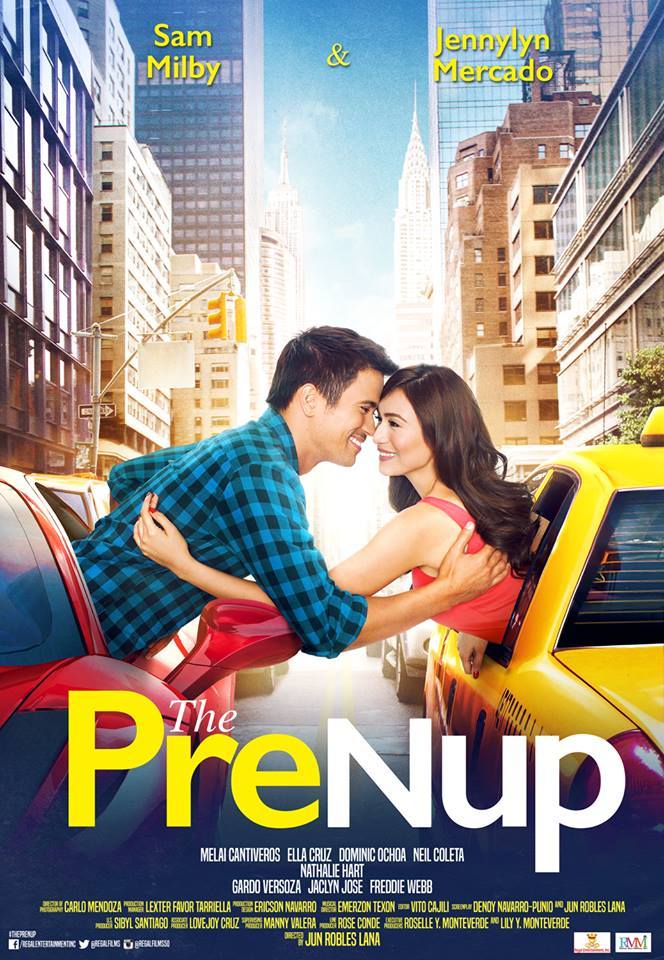 Cast: Sam Milby, Jennylyn Mercado
Two people meet on a plane and fall in love in New York. They are all set to get married back in the Philippines, but the guy's rich parents are suspicious of the girl's intentions and insist on a prenuptial agreement.

For the month of May, enjoy blockbuster movies like The Escort, Vince & Kath & James, and Seklusyon on Cinema One. PLUS: A highlight on Judy Ann Santos for her birthday month!
Welcome, SKY Kapamilya!
We use cookies to improve your browsing experience.
Continue to use this site means you agree to our use of cookies
Tell me more!
×