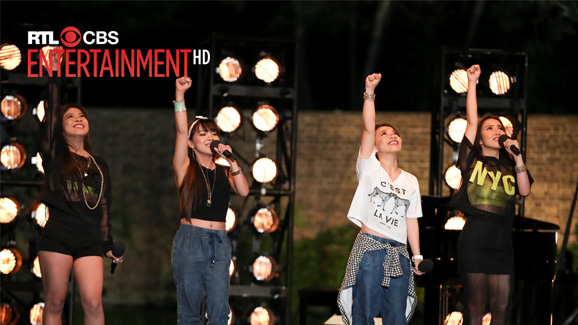 4th Power makes it to the Six Chair Challenge

In today’s episode of the latest season of The X Factor UK, we saw the popular girl group 4TH Power perform another high-octane number complete with choreography and belting out the high notes in the second audition round at Bootcamp. For this round, the girls decided to take on David Guetta’s hit Titanium. Judges were all smiles and the reaction from them and the hosts were mostly positive. Host Olly Murs commented, “That’s an audition.” Simon Cowell said that the performance “wasn’t as strong as their other two (auditions)” but said he would love to work with them.

The all-Filipino girl group is composed of sisters Mylene, Celina, Irene and Almira Cercado aged 19-27. The video of their first audition where they performed Jessie J’s hit Bang Bang has gone viral and has amassed over 15 million views on The X Factor UK’s official Youtube channel in the last four weeks.

Although not shown in today’s episode, another Filipino, Neneth Lyons, the 37-year old full-time mum from Chelmsford, also made it to the Six Chair Challenge as part of the Overs category. She competes with 16 other acts in the category.

The X Factor UK airs first and exclusive on RTL CBS Entertainment HD as live via satellite on Sundays and Mondays at 10:30am with a primetime encore at 9:00pm.

Starting October, The X Factor UK will only be airing on Mondays. There will be no episodes airing on the following Sundays: October 4 , 11 and 18.

RTL CBS ENTERTAINMENT is also available online via livestream on SKY On Demand if you are subscribed to the channel. WATCH NOW | KNOW MORE

In today’s episode of the latest season of The X Factor UK, we saw the popular girl group 4TH Power perform another high-octane number complete with choreography and belting out the high notes in the second audition round at Bootcamp.
Welcome, SKY Kapamilya!
We use cookies to improve your browsing experience.
Continue to use this site means you agree to our use of cookies
Tell me more!
×