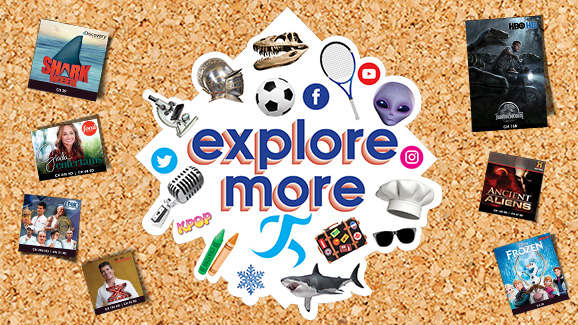 For leading cable provider, SKY, learning opportunities abound even beyond the walls of classrooms. They can be found in worlds that encourage discovery, even inspire them to get into a hobby, or simply expand their imagination – worlds that only SKY, thanks to its breadth of content, can give.

That’s because with SKY, viewers can explore more via its exciting shows and unlimited access to content.

The curious mind would definitely be excited to learn about evidence of human and extra-terrestrial contact in ancient times in “Ancient Aliens” season 8 on History Channel beginning July 15 every weekday at 11AM.

Foodies who want to harness their culinary skills can also begin July on a high note as SKY brings the best of lifestyle shows like “Inspired with Anna Olson” on Asian Food Channel premiering on July 29 at 9PM and “Giada Entertains” premiering on July 12 at 9PM on Food Network.

Chef Anna Olson will also share her culinary knowledge to Filipinos this month as she visits Manila on July 16 at the Eastwood Atrium. To meet and greet Anna Olson, SKYcable and Destiny Cable postpaid subscribers just need to have the Asian Food Channel (AFC) as part of their channel lineup and enter the SKY promo on the website.

Kids meanwhile, can join in the fun and imaginative adventures of Spongebob Squarepants on Nickelodeon and Elsa and Anna’s icy escapades on “Frozen” on Disney Junior on July 9 at 8AM. Cartoon Network and SKY meanwhile, will launch a school tour titled “Superstars Laugh Out League” featuring the best of Cartoon Network in select areas in Metro Manila.

Families who love to bond over reality shows can also check out RTL CBS Entertainment’s “X Factor UK” that will air on July 31 at 9PM.

Enjoy a world of endless possibilities starting this July only on Sky.

SKY aims to bring a wide array of premium content closer to Filipino families that they can conveniently watch using multiple devices. Sky Cable Corporation is a unit of ABS-CBN, the country’s leading media and entertainment organization.

Explore more with SKY's exciting cable shows, events
Welcome, SKY Kapamilya!
We use cookies to improve your browsing experience.
Continue to use this site means you agree to our use of cookies
Tell me more!
×