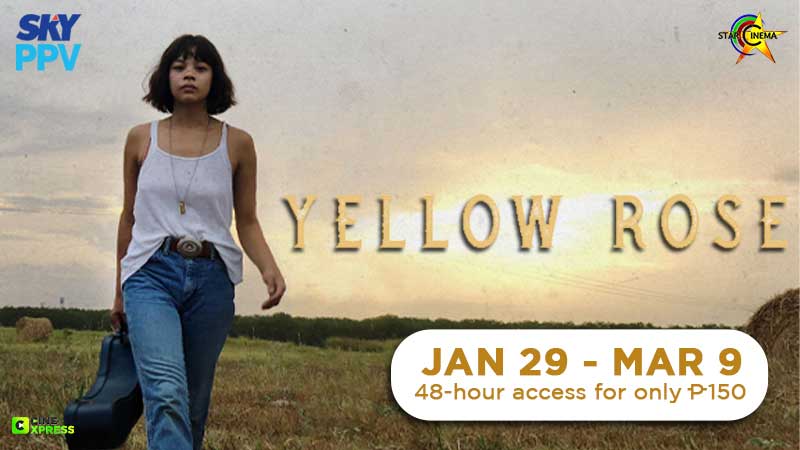 The story of an undocumented Filipina in the United States who dreams of becoming a successful musician will move Philippine audiences with the premiere of the Filipino-American musical drama flick "Yellow Rose," on SKY Movies Pay-Per-View on January 29 (Friday).

Unfortunately, her aspirations come to a halt when her mother, Priscilla (Princess), gets arrested by the state authorities for immigration issues. She then leaves her familiar life, fleeing to Austin, Texas, where she embarks on a whole new journey for herself.

Will she continue to pursue her lifelong dream as a musician, or will she set aside everything for the freedom of her family in the U.S.?

Distributed by Sony Pictures and ABS-CBN Cinematografo in the U.S., the film was first well-received by movie critics for its timely narrative and compelling soundtrack when it premiered at the Los Angeles Asian Pacific Film Festival in 2019 before its theatrical release on October 9, 2020.

"Yellow Rose," under the direction of Diane Paragas, then went on to win awards, including the Special Jury Award-Best Narrative Feature at the Asian American International Film Festival in New York City and the Grand Jury Prize-Best Narrative Feature and Best Breakout Performance for Eva Noblezada at the Los Angeles Asian Pacific Film Festival, along with Rotten Tomatoes' recommendation to include the movie among its Top 100 Films of 2020.

Movie afficionados can catch the critically acclaimed musical film in the comfort of their homes in high-definition and commercial-free as it airs on SKY Movies Pay-Per-View, distributed by CineXpress, from January 29 until March 9 (Tuesday) for only P150, with 48-hour access upon purchase.

Movie afficionados can catch the critically acclaimed musical film in the comfort of their homes in high-definition and commercial-free
Welcome, SKY Kapamilya!
We use cookies to improve your browsing experience.
Continue to use this site means you agree to our use of cookies
Tell me more!
×