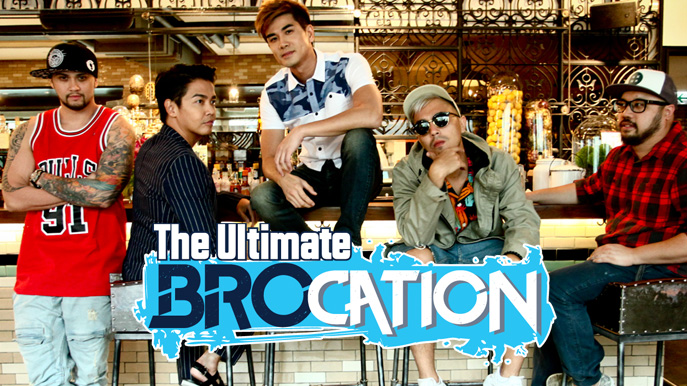 The Ultimate BROcation. NO GIRLFRIENDS. NO KIDS. NO SLEEP.

Welcome to The Ultimate BROcation – A hilarious reality show about four celebrities on an all-expenses-paid vacation tailor-made for BROs!


Sometimes a guy just wants to leave his girlfriend, wife or kids behind and go on a trip with his “BROs.” Well, four celebrities from four different countries are about to embark on such a trip when a Kung Fu star invites them to an all-expenses-paid, tailor-made vacation in Hong Kong!

Follow R&B/Pop Star Billy Crawford, Hip Hop Artist SonaOne, DJ and TV host P.K., and Maverick Chef Bjorn Shen as they go on a five-day adventure filled with parties, girls, gadgets, and lots and lots of food! Will there be bromance or will their egos get in the way? One thing’s for sure, there will be lots of BRO-bantering and laughter. Find out what these celebrity dudes are like, when they leave their girlfriends at home and go on a “BROcation” of a lifetime! Best of all, it’s in Hong Kong!

The Dis-BROrganized Meet Up in Hong Kong
Welcome to the Ultimate BROcation! Meet kung fu star Philip Ng as he welcomes four celebrity BROs who are complete strangers to his hometown for an all-expense paid vacation! Getting four BROs in one place is hard enough, but wrangling four celebrity BROs who are also strangers is another story! With the BROs being late and with Philip suddenly leaving last minute for filming, will the Ultimate BROcation even begin?

FaBROlous cars, women and wine
It’s day two of the Ultimate BROcation and the four celebrities BROs are left on their own devices after Philip’s abrupt departure for a shoot. Waking up to a day that is left in the hands of the outlandish P.K., the BROs are unsure of what to expect as he boldly promise them a high-octane, adrenaline-fueled day. Will the skeptical BROs and P.K.’s larger-than-life personality, along with a BRO-challenge thrown into the mix, lead to more bruised egos than a fun day that was promised?

The Outdoor BROventure
Rise and shine to day three of the Ultimate BROcation with SonaOne leading Billy Crawford, Bjorn Shen and P.K. on an exhilarating day! Setting off to the beach, the BROs are shocked to see a new side of Hong Kong that they did not expect, as well as the activities SonaOne had in store for them, including fly-boarding, bubble football and gadget-shopping!

BROvolt in the Gang!
The BROs gather in the lobby of the hotel on day four to find out that maverick chef, Bjorn Shen, will be leading the show, and that he has organized for them to explore the more traditional side of the city. But with Bjorn’s devil-may-care attitude, things quickly dissolve into a mess with the things he’s organized. As the BROs get more and more irritated with the day, two of the BROs break rank and rebel against his plans – abandoning Bjorn for an opulent night out. Is this the end of The Ultimate BROcation?

BROtastrophy in the making
It’s near the end of the Ultimate BROcation and Philip has returned, only to see that the BROs are harboring some unresolved issues from the trip. Deciding to settle it like men, Philip takes the group on another BRO-challenge – an exciting BB gun shootout - with the stakes being excruciatingly humiliating for the loser. What comes next is a hilarious showdown with one of the BROs becoming the Ultimate loser!

KIX not yet in your plan?
Choose to add KIX to your SKYcable basic plan via SELECT for only Php 20/month in Standard Definition.
GET KIX

Follow four famous guys through five episodes of fun and exhilarating adventures as they experience the ultimate guys’ playground, Hong Kong
Welcome, SKY Kapamilya!
We use cookies to improve your browsing experience.
Continue to use this site means you agree to our use of cookies
Tell me more!
×