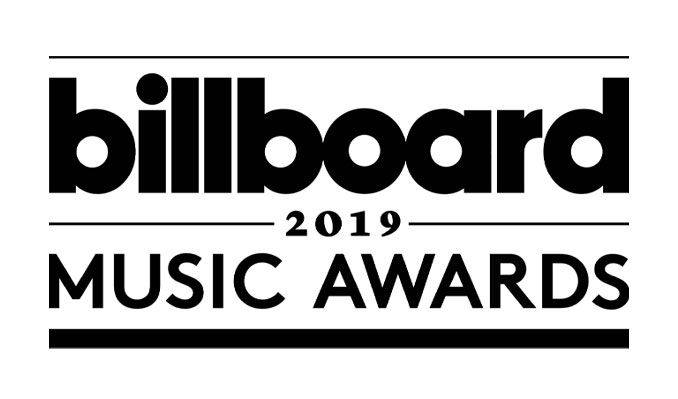 2019 Billboard Music Awards: Top Nominees, Performers, and Where to Watch

The Billboard Music Awards are back to showcase this year’s hottest musical acts, awarding today’s most popular recording and touring artists. Kelly Clarkson will be returning to host the three-hour live telecast filled with unexpected collaborations and buzzy moments.

Watch the 2019 Billboard Music Awards live from the MGM Grand Garden Arena in Las Vegas on Thursday, May 2 at 8:00AM on Blue Ant Entertainment. Catch your favorite artists dressed to the nines live from the Red Carpet at 6:00AM on E!

Billboard Music Awards nominees and winners are based on key fan interactions with music, including album and digital song sales, streaming, radio airplay, touring and social engagement, tracked by Billboard and its data partners, including Nielsen Music and Next Big Sound. The awards are based on the chart period of March 23, 2018 through March 7, 2019. Since 1940, the Billboard charts have been the go-to guide for ranking the popularity of artists, songs and albums, and are the ultimate measure of success in music. 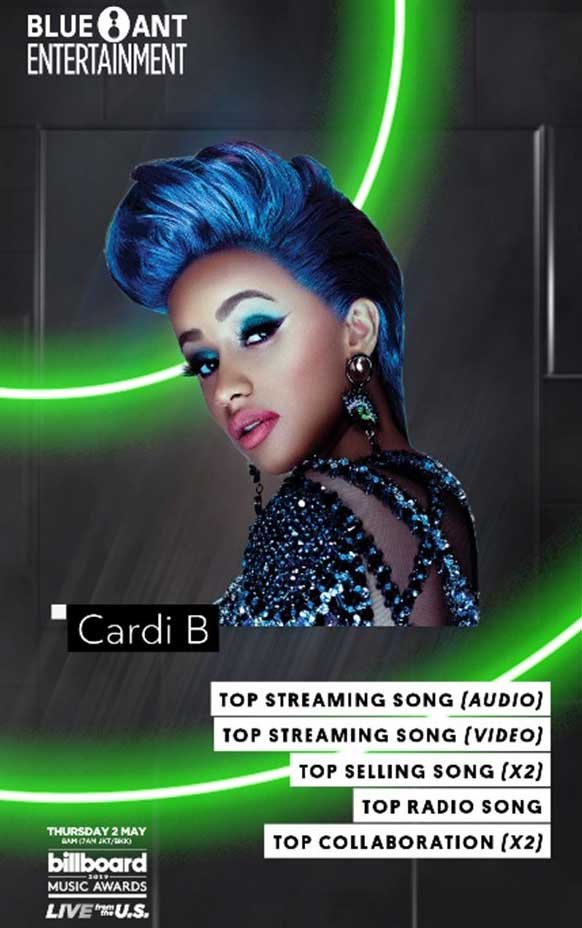 In addition to receiving the most nominations (21), Cardi B is also nominated in more categories than any other artist this year (18). She is nominated twice in three of the 18 categories: Top Hot 100 Song, Top Selling Song and Top Collaboration. 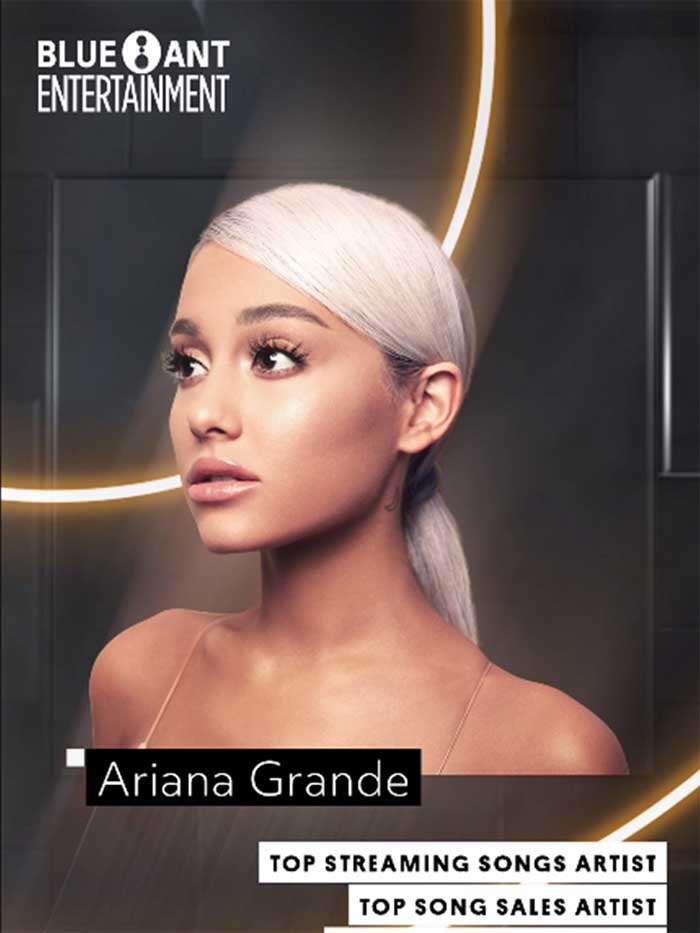 Ariana Grande, who scored 9 nominations this year including Top Artist, Top Female Artist and for the second year in a row, Top Social Artist, could receive her first ever Billboard Music Award at this year’s show. 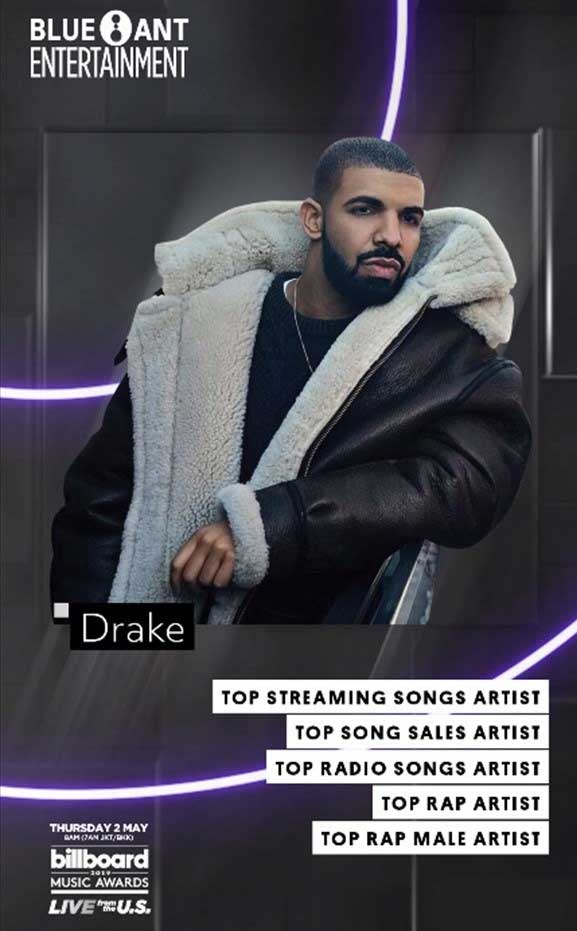 Drake tails closely behind Cardi B with 17 nominations this year, tied with Post Malone. All three artists have the chance to surpass his record (13) for the artist with the most wins in a single night. Drake could very well break his own record for most wins in one night.
See the full list of nominees → 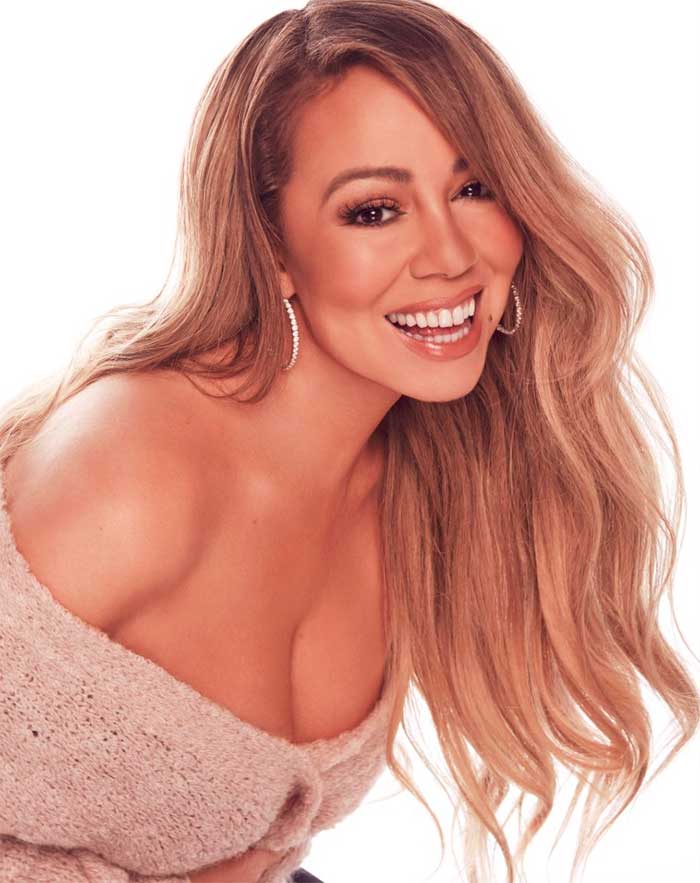 The true definition of an icon, Carey has been smashing records since she debuted on the music scene in 1990 with her self-titled album. She will be taking the stage to accept the ICON Award and performing a show stopping medley of her greatest hits. The last time she took the Billboard Music Awards stage was back in 2015. 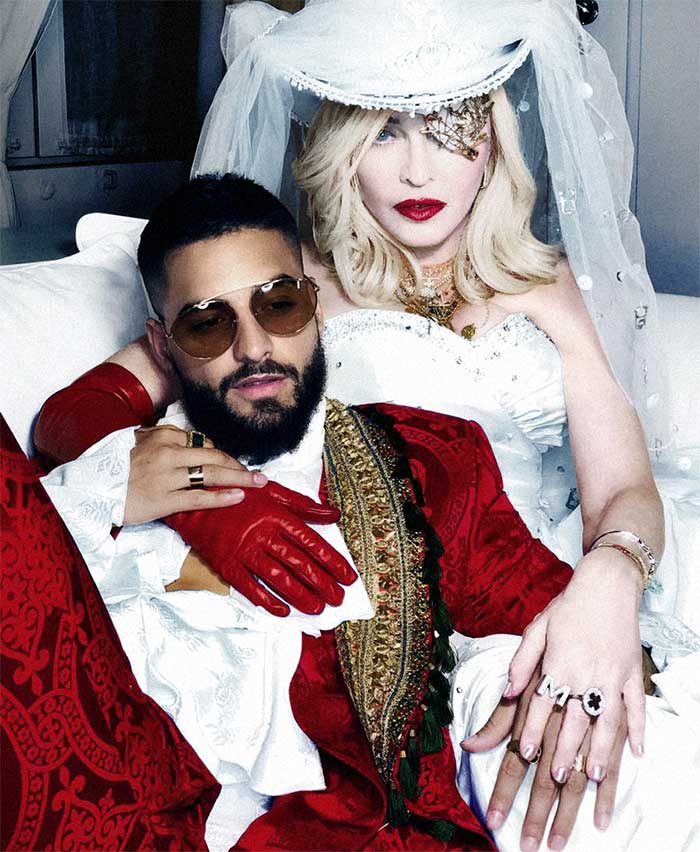 Returning to the award show performance stage with new music for the first time in over four years, four-time BBMA winner Madonna will be performing “Medellín” with Maluma, who will be making his BBMA debut.

The two are the latest addition to the roster of this year’s star-studded, and exciting performance line-up, which already includes the Jonas Brothers, Panic! At the Disco, Kelly Clarkson, and Lauren Daigle, as well as collaboration stages between BTS and Halsey, and Sam Smith and Normani. 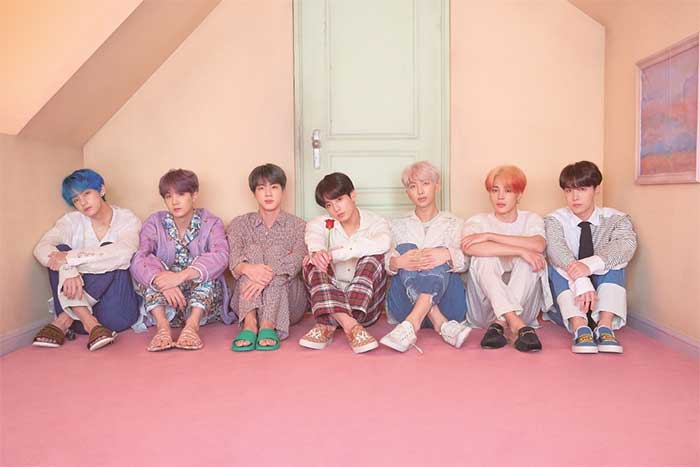 BTS scored its first three No. 1 albums on the Billboard 200 chart with Love Yourself: Tear, Love Yourself: Answer, and their latest EP, Map of the Soul: Persona. They’re the first group since The Beatles to accomplish the feat in less than a year – a mind blowing fact given that majority of their songs are in Korean. 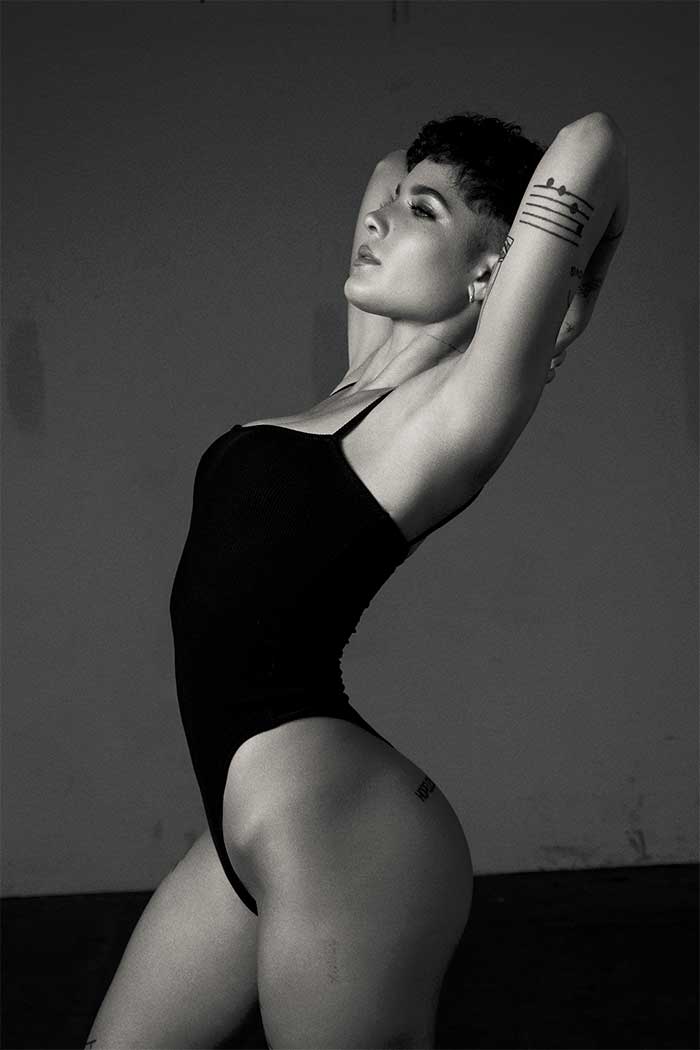 Halsey’s 2019 brought her first Hot 100 No. 1 as a lead artist, "Without Me." She has earned four No. 1s on the Pop Songs chart, with her latest, "Eastside," with Benny Blanco and Khalid, replacing "Without Me" directly at the summit. 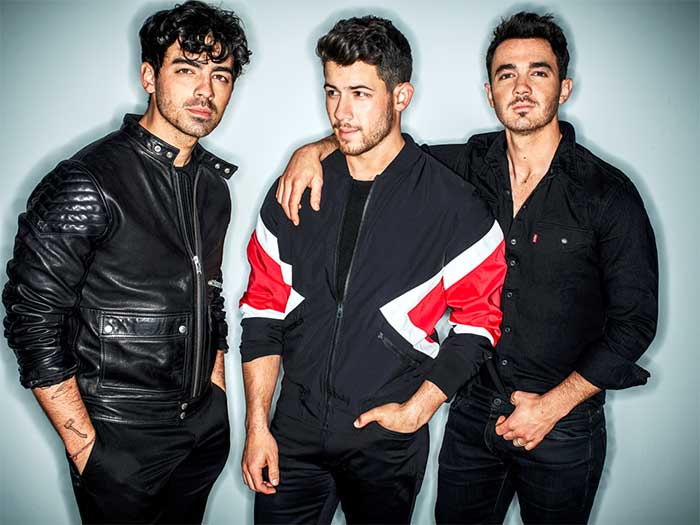 Jonas Brothers may have taken a break for a few years, but the sibling trio of Kevin, Joe and Nick Jonas came roaring back in 2019 with their first No. 1 on the Billboard Hot 100 songs chart, “Sucker.” The track debuted atop the list, marking the first time a group opened at No. 1 in more than 20 years. 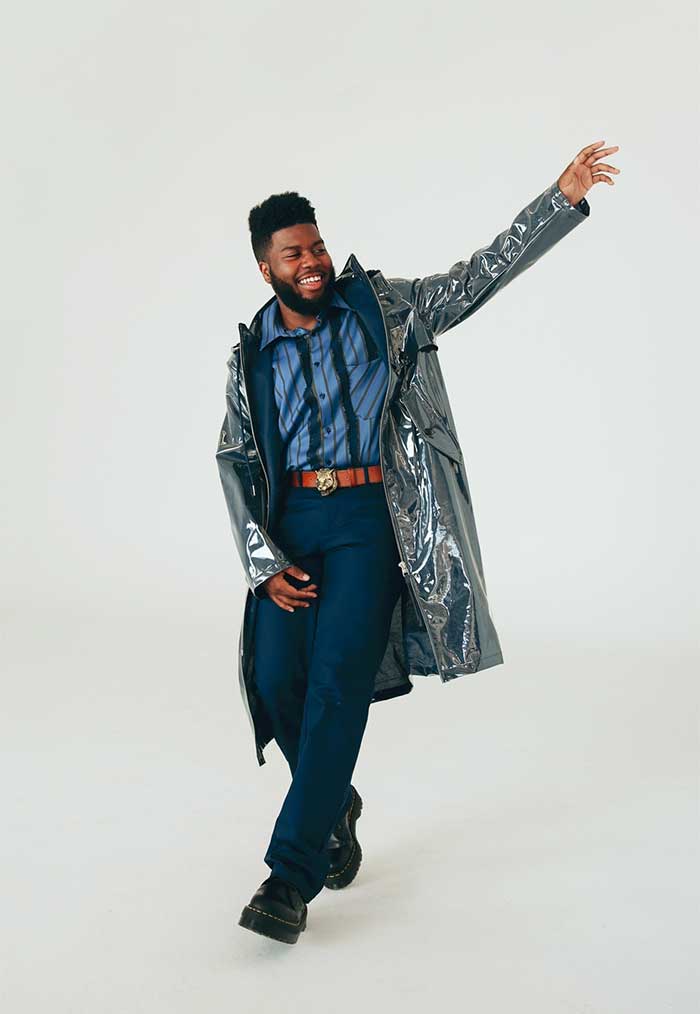 It's been only three years since Khalid made his Billboard chart debut, but he's quickly established himself as a chartforce and streaming juggernaut. His album, American Teen and EP Sun City, both hit No. 1 on Billboard's Top R&B Albums chart. 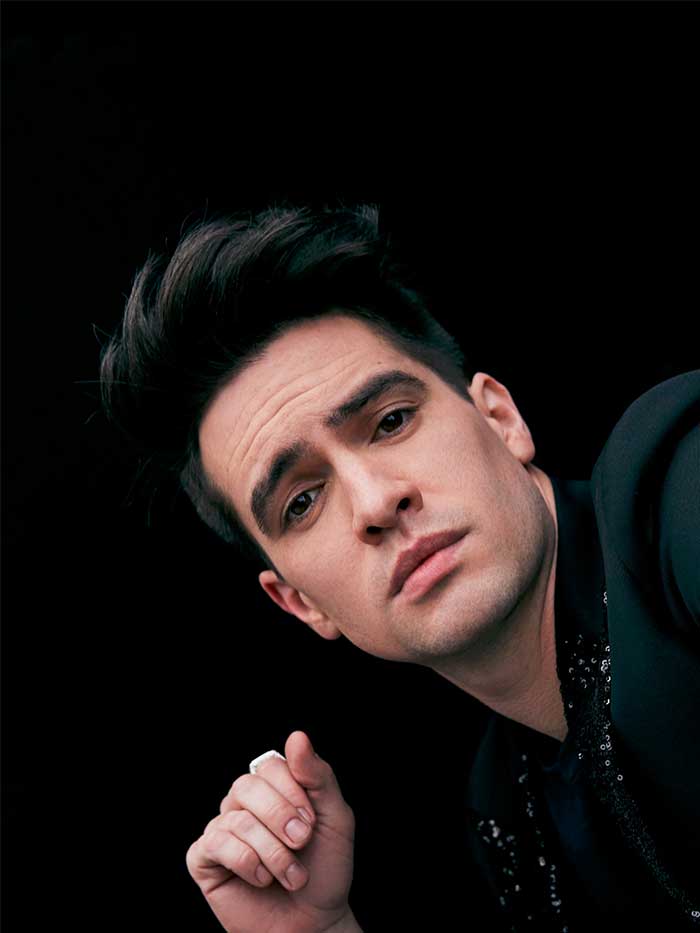 Panic! At The Disco

Over a dozen years into its career, Brendon Urie-fronted Panic! At The Disco is hitting new heights on Billboard's charts. The act scored its first No. 1 Billboard 200 album, Death of a Bachelor, in 2016 and followed with its second, Pray for the Wicked, in 2018. 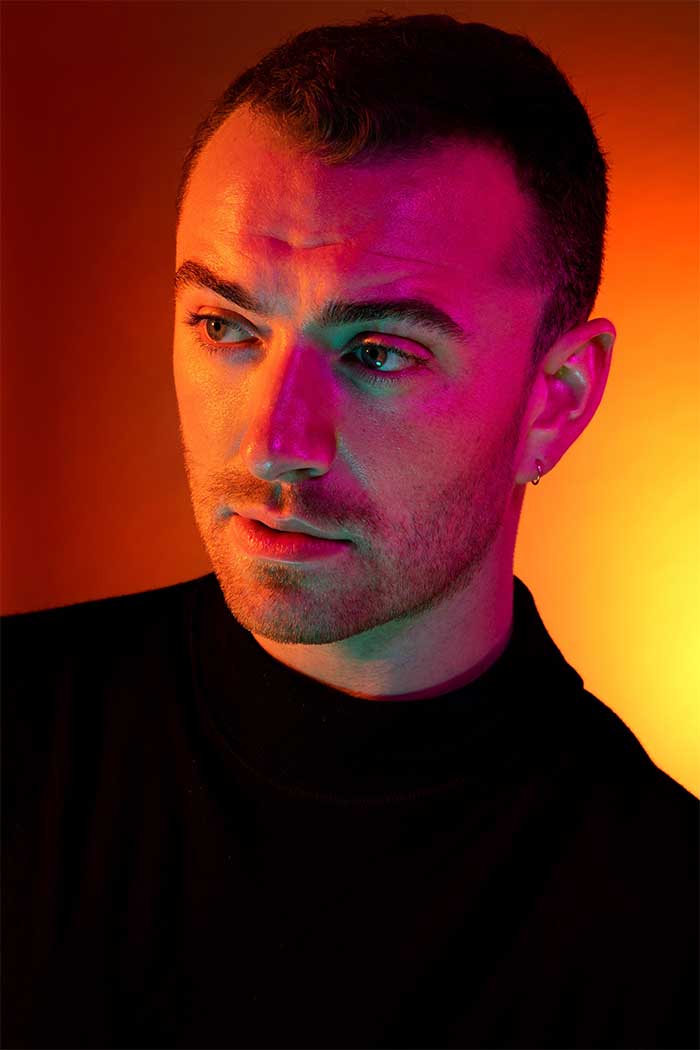 Just six years after Sam Smith made his Billboard chart debut, the singer-songwriter has racked up a string of hit albums and singles on the charts. Most recently, Smith’s duet with Normani, “Dancing With a Stranger.” 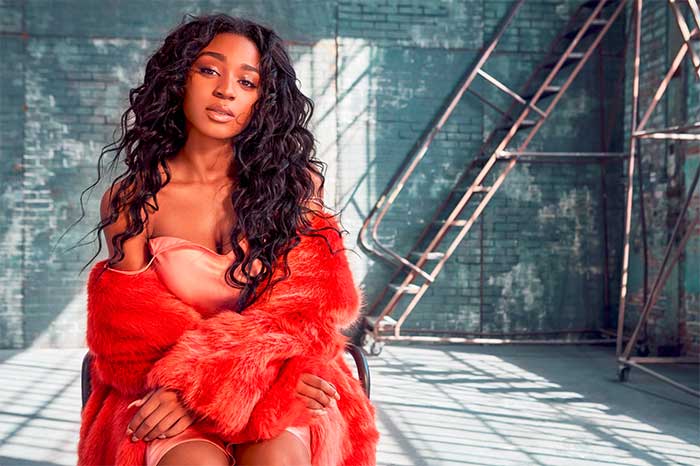 Former Fifth Harmony singer Normani took the charts by storm in 2018 with her hit single “Love Lies” with Khalid. This year, she’ll be performing another smash duet, “Dancing With a Stranger,” with three-time BBMA winner Sam Smith. 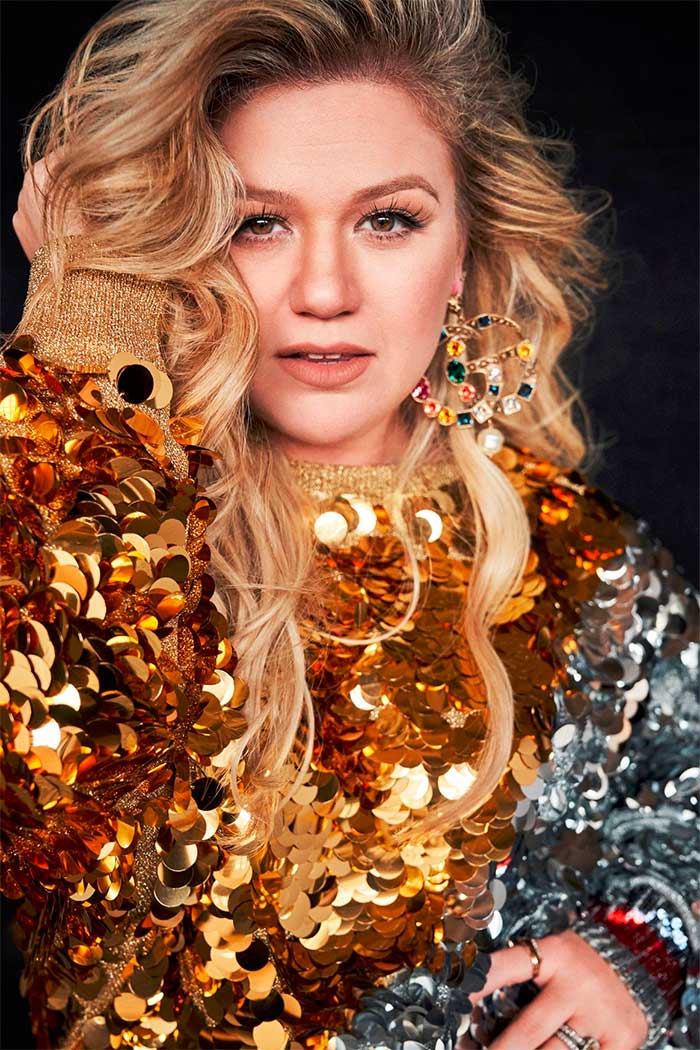 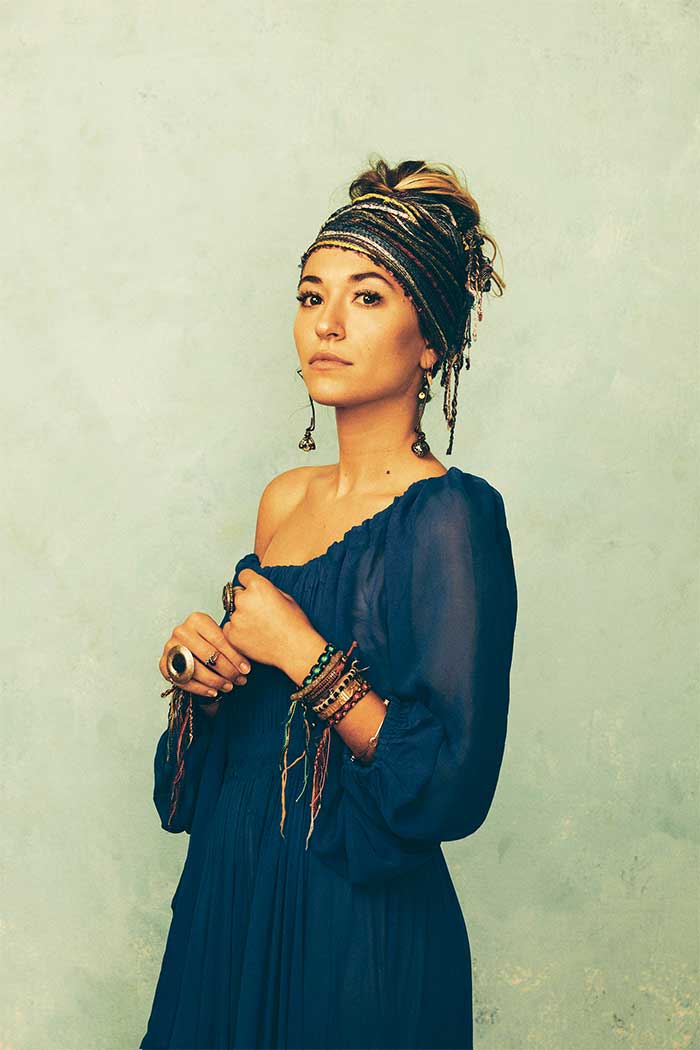 Lauren Daigle has notched three No. 1s on Billboard's Top Christian Albums chart. The Louisiana native has earned four No. 1s on Hot Christian Songs, including "You Say," which crossed over to the Billboard Hot 100's top 40 and the top 10 of the Adult Pop Songs and Adult Contemporary airplay charts.

Watch the Billboard Music Awards via SKY On Demand

Kelly Clarkson back as host, plus a collab stage featuring BTS & Halsey.
Welcome, SKY Kapamilya!
We use cookies to improve your browsing experience.
Continue to use this site means you agree to our use of cookies
Tell me more!
×