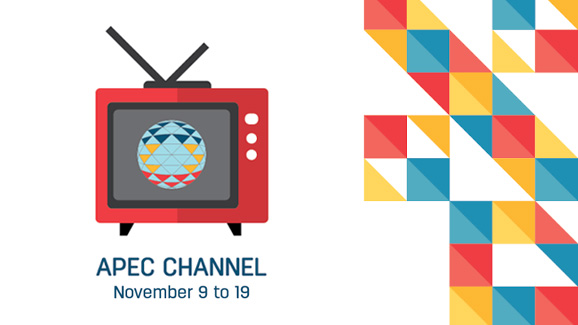 After almost two decades, the Philippines hosts and chairs the Asia-Pacific Economic Cooperation (APEC). We hosted APEC meetings for the first time in 1996. The most high-profile event, the APEC Leaders’ Meeting, was held in Subic Bay, Zambales in November of that year.

In 2015, the leaders, senior officials, top businessmen, and industry experts of and from the group’s 21 member-economies will once again come together in the Philippines. The year-long hosting will culminate in the APEC Economic Leaders Meeting (AELM) to be held in Manila from November 19 to 20.

Tune in your SKYcable FREEVIEW channels from 6am to 10pm to catch the proceedings live!

The Asia-Pacific Economic Cooperation, or APEC, was established in 1989. It started as an informal ministerial level dialogue group with 12 members comprising of Australia, Brunei Darussalam, Indonesia, Japan, South Korea, Malaysia, New Zealand, Philippines, Singapore, Thailand, Canada, and the United States. The APEC was initiated as an annual meeting of foreign and trade ministers to sustain the momentum of market opening and economic cooperation which are vital to the growth and prosperity of the Asia-Pacific region.

The primary reason and purpose behind APEC’s establishment is the desire to have a forum that caters to the enhancement of economic conditions of states. This would entail the facilitation of economic growth, promotion of cooperation among states, liberalization of trade, and creation of opportunities for investments in the Asia-Pacific community.

The main goal of APEC is to provide an avenue in creating and maintaining sustainable economic growth and prosperity in the region. This vision was translated to the Bogor Goals of 1994 of free trade and open trade and investments in the Asia-Pacific. During its creation, APEC aimed at attaining this goal by 2010 for industrialized economies and 2020 for developing economies.

Moreover, to achieve the Bogor goals, the APEC member economies developed a framework known as the “Three Pillars” in Osaka, Japan in 1995. The three (3) pillars serve as a guiding instrument in attaining the overall goal of free trade and investments. These pillars are stated below:

Business Facilitation aims to reduce business and trade transaction costs. The reduction in the production costs leads to an increase in trade, investments, and business opportunities for the primary reason that goods and services become cheaper. This could result in more employment opportunities which contribute to the overall improvement in one’s economy.

This pillar also aims to facilitate faster means of accessing and acquiring trade information. It aligns its policies and strategies towards the facilitation of economic growth and an open and free trade environment.

Under the Philippines’ leadership, the overall subject of APEC 2015 is the promotion and advancement of inclusive growth in the Asia-Pacific region, hence the APEC 2015 theme, “Building Inclusive Economies, Building a Better World.” Accordingly, inclusive growth can be defined, described, and analyzed in three stages –domestic/national, regional, and macro levels.

What are the APEC 2015 priorities of the Philippines as host Economy?

In APEC 2015, the Philippines as Host Economy shall seek to mainstream and pursue its priorities into the agenda and economic policy thrusts of the member economies in the Asia-Pacific region. Specifically, the priorities were identified as follows:

Tune in your SKYcable FREEVIEW channels from 6am to 10pm to catch the proceedings live!

After almost two decades, the Philippines hosts and chairs the Asia-Pacific Economic Cooperation (APEC). We hosted APEC meetings for the first time in 1996. The most high-profile event, the APEC Leaders’ Meeting, was held in Subic Bay, Zambales in November of that year.
Welcome, SKY Kapamilya!
We use cookies to improve your browsing experience.
Continue to use this site means you agree to our use of cookies
Tell me more!
×