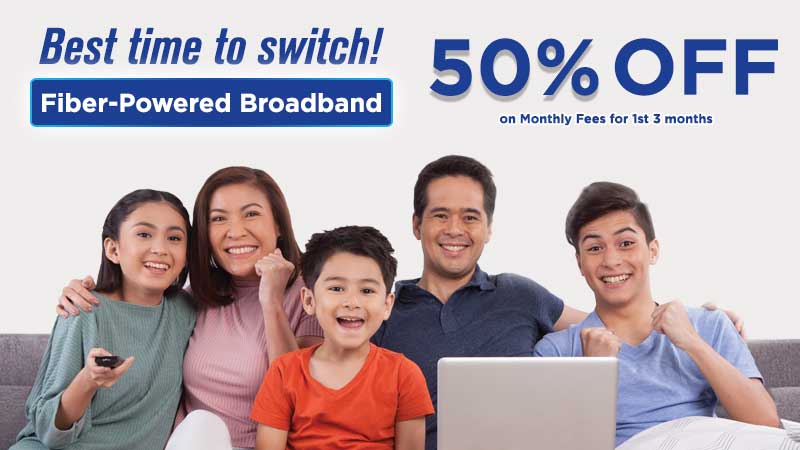 SKY is offering deals that will push Filipinos to easily make the switch to One SKY's fiber-powered broadband as it expands in key areas around the country.

Until end of 2018, qualified switchers can avail of a 50% discount on its first three monthly fees plus a low one-time cash-out upon installation. Meanwhile, those availing the One SKY Premium or Lite plans will get the additional perk of a 15-day free access to SKYcable’s full channel line-up while switchers to One SKY Streaming plans can enjoy a 2-month online access to ABS-CBN free to air channels and 7-select cable channels (CNN, ANC, Cartoon Network, Warner, History, Blue Ant Entertainment and Nickelodeon) via SKY On Demand.

“The internet is now a basic need, not a bonus amenity in homes. Our discounted One SKY Fiber-powered plans would hopefully enable more Filipino families nationwide to access the internet minus the steep fees as the demand for high-speed internet continues to grow,” Alan C. Supnet, SKY head of broadband products said.

Supnet added that SKY’s introduction of its discounted One SKY Fiber plans is a response to the increasing number of families who rely heavily on the internet for news, entertainment, and communication as well as dissatisfaction on DSL-based subscription plans offered by competition.

“We’re giving Filipino families an opportunity to enhance the quality of their home internet connection with our fiber-powered broadband plans. This is also SKY’s way of advancing internet speeds in the country,” he elaborated.

One SKY Fiber offers fiber-powered broadband with speeds ranging from 5Mbps to 100Mbps. Launched in June 2018, it’s new unlimited Plan 5Mbps at only P999/month is one of the most affordable in the market today.

In a recent report by global internet testing analysis firm Ookla for the first half of 2018, SKY achieved a speed score of 10.89, one of the fastest among major providers in the Philippines. The fixed network award was based on 29,076,090 user-initiated Speedtest Award report nationwide for the same period.

Launched in 2016, One SKY Fiber enables families to enjoy convenient and superior entertainment with its bundle plans. SKY’s introduction of One SKY Fiber also complements ABS-CBN, SKY’s mother company, in its transition to become a digital organization.

Visit mysky.com.ph/switch or drop by any SKYzone business center in select malls for more details.

Switch now to enjoy a discount!
Welcome, SKY Kapamilya!
We use cookies to improve your browsing experience.
Continue to use this site means you agree to our use of cookies
Tell me more!
×