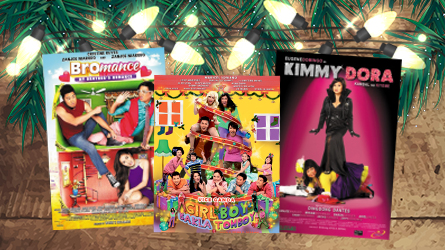 Sisters Kimmy and Dora Godonghae (Eugene Domingo) are identical twins with radically different personalities. The older Kimmy is the intelligent, domineering and Machiavellian type, while Dora is a sweet, kindhearted half-wit. Kimmy has always been jealous of her sister as Johnson (Dingdong Dantes), the man she really likes, only has eyes for Dora. All hell breaks loose when their Korean father, Luisito Go Dong-hae (Ariel Ureta) suffers a heart attack and makes Dora the majority owner of their family conglomerate in case he dies. Kimmy thinks this to be unfair and gets the help of their family's lawyer, Harry (Baron Geisler), to take care of business. A misunderstanding brings forth a plan to kill Dora, but the hired hands kidnap Kimmy instead. Now Kimmy must find a way to escape her captors while Dora must act as her tough sister and control their company in order to hide the truth from their sick father.

A young man is forced to pretend to be his estranged gay brother in order to keep a major business from falling through. Though he has always hated his brother, the young man gains a new appreciation as he lives his brother's life.

After long years of separation, quadruplets Girlie (Female), Peter (Male), Mark (Gay), and Panying (Lesbian) meet again when Peter needed a compatible liver donor. Mark is the only match, and he sets a condition in exchange of his liver - for Girlie, Peter, and their father Pete (Joey Marquez) experience the hardships he, Panying, and their mother Pia (Maricel Soriano) have gone through. He then makes sure Girlie goes through hell on their behalf. In the process, Mark starts to give their family another chance and sees them on a different light. However, just when things are going well for them, Girlie schemes to get even with Mark. Worse, Pete’s current fiancee Marie (Ruffa Gutierrez) plans to have him and Pia permanently separated. Is there a happy ending for this unconventional family?

Mga pelikulang magbibigay ng paulit-ulit na saya at kulitan ngayong December sa SKY FREEVIEW
Welcome, SKY Kapamilya!
We use cookies to improve your browsing experience.
Continue to use this site means you agree to our use of cookies
Tell me more!
×