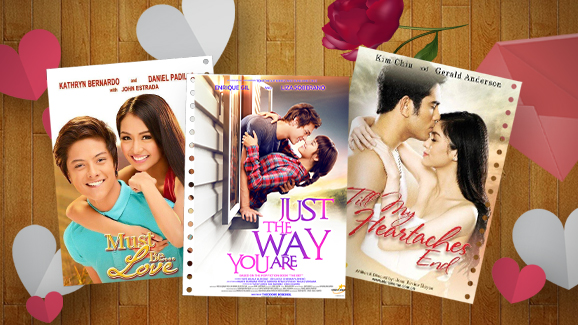 Love out loud on SKY FREEVIEW

Paolo "Powie" Barredo (Gerald Anderson) is out to prove to the world that he can succeed in life independently, and is not just a son born out of wedlock. Agnes Garcia (Kim Chiu) always longed for the time when her family will finally be completed again. They find each other at a café and couldn't take their eyes off each other. They found solace and comfort in each other's company. But their life paths moved them in opposite directions.

"Must Be... Love" follows the love story of Patricia, better known as "Patchot or Patch" played by Kathryn Bernardo and her childhood best friend Ivan (Daniel Padilla). But what will Patchot do if she starts falling in love with her best friend? And what if Ivan only sees her as a 'best friend'? This problem will develop when another girl enters Ivan's life. Unfortunately for Patchot, it's her cousin Angel (Liza Soberano). Will Ivan fall in love with "Patchot" or will they remain as best friends forever?

The story follows a popular guy named Drake Sison (Enrique Gil), who makes a bet with his best friend Andrei (Yves Flores), to make the nerdy transfer student, Sophia Taylor (Liza Soberano), fall in love with him in 30 days. Once she falls for him, he must confess that it was all a bet.

Kiligin sa tamis ng young love ngayong February sa SKY Freeview
Welcome, SKY Kapamilya!
We use cookies to improve your browsing experience.
Continue to use this site means you agree to our use of cookies
Tell me more!
×