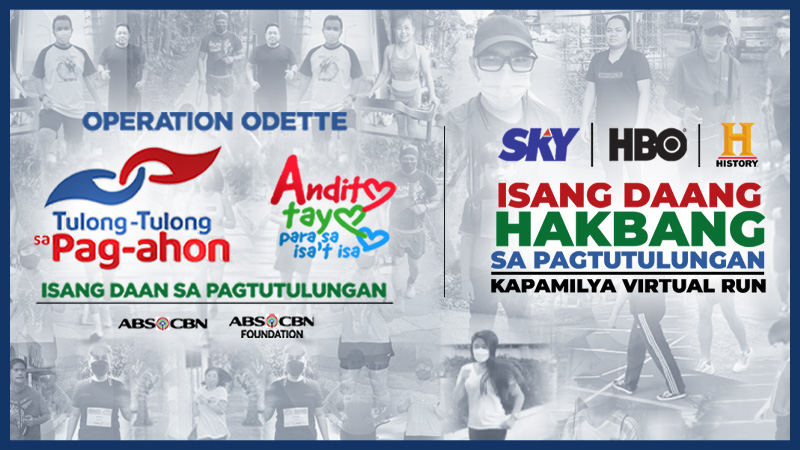 SKY’s "Isang Daang Hakbang Sa Pagtutulungan: Kapamilya Virtual Run" raised more than P500,000 in donations, which can provide food packs to over 1,000 families or 5,000 individuals who are still struggling after the devastation caused by Super Typhoon Odette.

Several participants gladly shared their photos and videos finishing the challenge on Facebook and Instagram, using the hashtag #100HakbangSaPagtutulungan to encourage friends and family to join. Whether they completed the challenge safely indoors or outdoors, they enjoyed the opportunity to be active and healthy amid the pandemic while also being able to help others in a simple way.

Shirley Diaz, one of the participants, proudly shared on her Facebook after completing her 100 steps, "It may not have been a marathon-level performance, but I was able to extend help to those affected by Typhoon Odette."

Gel Jose, another participant, said in a Facebook post, "I was able to donate money that will help provide food and essential supplies to families affected by Typhoon Odette. I also pledged to run 5K, which I completed all at one go after a year of being sedentary. Hopefully, I can maintain this momentum towards having a more active life."

Aside from the 100-step challenge, around 300 participants went the extra mile and completed 5K and 10K virtual runs to send larger donations for the victims.

"We are extremely thankful to everyone who participated in ‘Isang Daang Hakbang Sa Pagtutulungan: Kapamilya Virtual Run.’ More than your donations, the time and effort you made to complete the challenge and share it on social media makes a big difference in inspiring others to also take a step towards helping our Kapamilyas. Every peso means food, clothing, medicines, home, and hope for our kababayans in need. All of you greatly contribute to our mission to be in the service of the Filipino," said Jaynalen Redondo-Roque, SKY’s head for Integrated Marketing and Airtime Business and the organizing committee head of the virtual run.

SKY’s organizing team for this virtual run also hopes that this initiative will inspire others to be more creative with engaging activities and efforts to help our Kapamilyas in need.

"Isang Daang Hakbang Sa Pagtutulungan: Kapamilya Virtual Run" was organized by SKY, in partnership with HBO and History, to support ABS-CBN and ABS-CBN Foundation’s "Tulong-Tulong sa Pag-ahon: Isang Daan sa Pagtutulungan," the second phase of their fund drive for the benefit of Odette survivors. As of March 17, ABS-CBN Foundation has delivered food packs to 207,029 families with the help of the donations. Even more families will be able to receive aid with the donations collated from this virtual run.

Aside from the continued support of food packs to the survivors still in evacuation centers, ABS-CBN Foundation will also utilize the donations to distribute even more home repair kits to families whose houses were destroyed in the calamity. As of March 17, 584 families in underserved areas have received home repair kits to support the rebuilding of their homes.

This campaign is under ABS-CBN Foundation DSWD Authority/Solicitation Permit, DSWD-SB-SP-00026-21, valid nationwide until May 28, 2022.

More than 1000 participants raised over half a million in donations
Welcome, SKY Kapamilya!
We use cookies to improve your browsing experience.
Continue to use this site means you agree to our use of cookies
Tell me more!
×