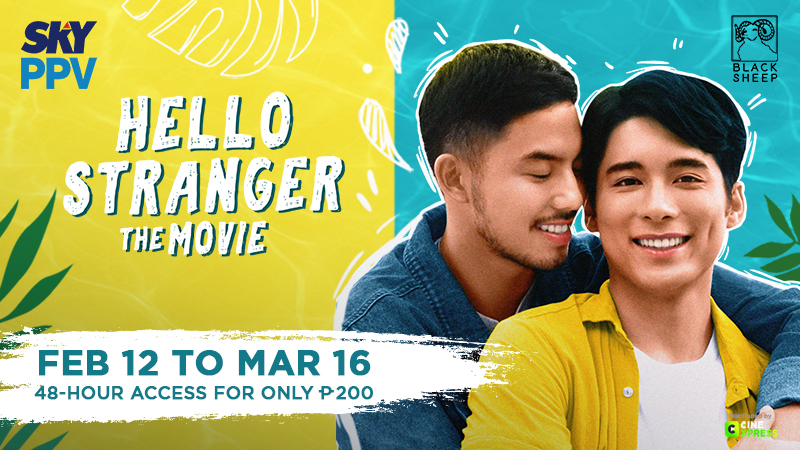 SKY treats viewers this Valentine's with the premiere of "Hello Stranger: the Movie"

"Hello Stranger" first made waves in 2020 as an eight-part digital BL series, proving to be a hit to fans as it garnered over 1 million views per episode on Black Sheep's YouTube and Facebook pages. Viewers worldwide could not get over the pairing of Tony and JC as many reaction videos on the most-watched Pinoy BL series sprouted online.

Now with Dwein Ruedas Baltazar as its director, the story continues from where Xavier (Tony) and Mico (JC) left off—professing their feelings for each other despite their differences.

With more time together physically, the two begin their new journey as they head off to a writing camp with their friends to further explore their passions. But their beautiful connection gets entangled as Xavier appears to have "friendzoned" Mico and bonds along more often with his ex, Crystal (Gillian Vicencio), while the latter meets and feels closer with Simon (Markus Paterson) at the same camp.

Despite their complicated situation, will Xavier and Mico still find the way to each other's hearts?

Feel the kilig this Valentine's as the loveteam of #XavMi is ready to charm audiences at home once more with the premiere of "Hello Stranger: The Movie" on SKY Movies Pay-Per-View, distributed by CineXpress, showing February 12 to March 16. Experience the love in high-definition and commercial-free for only P200 with 48-hour access.

Subscribers with SKYcable or SKY Fiber + HD Cable TV can avail of this special pay-per-view offer. Visit mysky.com.ph/cinexpress to subscribe.

The sequel to the most-watched Filipino digital Boys’ Love series last 2020 comes to SKY homes this Valentine's season with its premiere on SKY Movies Pay-Per-View
Welcome, SKY Kapamilya!
We use cookies to improve your browsing experience.
Continue to use this site means you agree to our use of cookies
Tell me more!
×