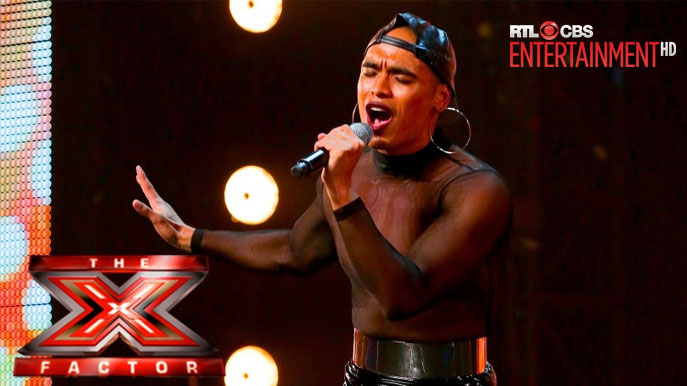 As Filipinos continue to be in awe and be supportive of 4TH Power's journey on The X Factor UK, a little known fact about another contestant, Seann Miley Moore, has emerged. In a recent interview, Seann reveals that he is Filipino. On the show, he was always presented as a contestant who flew from Australia to the UK on a one-way ticket just to join the contest. There were no reports on his ethnicity. "My mum is Filipino and the Filipinos have their infamous love of karaoke so we used to do that a lot at home," he responded when asked about his singing background. Aside from roots in the Philippines, he also has a deeper connection to Asia having been raised in Thailand and Indonesia. He and his family moved to Australia in 2003.

His formal training in singing and performance comes from attending theatre school in Perth. Seann studied at the prestigious Western Australia Academy of Performing Arts, the same school Hugh Jackman attended. Moore was accepted after his third try. He spent three years studying acting, singing, dancing and just furthering his skills as a performer. From his first audition when he sang Queen's "The Show Must Go On," Seann has captivated audiences and the judges. "I was literally spellbound for that whole performance," said judge Cheryl Fernandez-Versini after Moore's audition. "You were fearless. You were sharp. You were sassy. You were just giving us everything. You were amazing," Fernandez-Versini said. 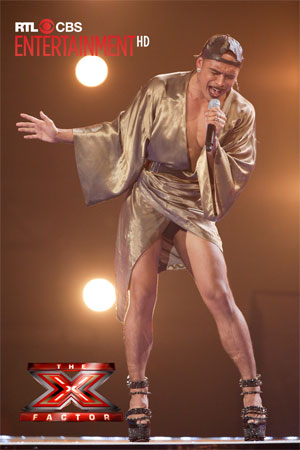 Seann draws everybody in as soon as he steps on stage. He is a powerful singer with his own distinctive style of dressing. "I've always, always wanted to find an artist you can't compare with anyone else, that's got originality, and most importantly, you've gotta remember someone…," Simon Cowell said.

Asked of the remaining acts in the competition whose album he would buy, "I would buy 4TH Power's because they are Filipino like me. I have to have a bond with them," said Seann.

It can now be said that two acts still in the competition on The X Factor UK have roots in the Philippines: 4TH Power and Seann Miley Moore. Aside from them and Neneth Lyons, the show also featured contestant Jenesa Gil, who did not make past the Bootcamp round.

The X Factor continues with the Judges' Houses next week where the contestants will again go through another round of auditions. This round will determine the 12 acts that get to perform in the live shows.

The X Factor UK airs first and exclusive on RTL CBS Entertainment HD as live via satellite on Sundays and Mondays at 10:30am with a primetime encore at 9:00pm. The weekly episodes repeat on Thursdays at 9:00pm and on Saturdays at 10:00am and 4:40pm.

My mum is Filipino and the Filipinos have their infamous love of karaoke so we used to do that a lot at home. My main singing training however probably came from attending a theatre school over in Perth. It took me three years to get into the school as they only pick nine boys and nine girls but when I finally got in, I spent three years studying acting, singing, dancing and just furthering my skills as a performer. Eventually I gave up performing arts because I always knew I wanted to audition for The X Factor.My dad's also actually from the UK so there's the heritage aspect. I decided to book my ticket and took a chance.

Q. So you're not a stranger to the stage then

No stranger to the stage and as Nick said 'you're born to do it' so every time I'm on that stage I have such a thrill. Performing is the thing that I love and I can't describe the feeling it's just fabulous!

Q. Why did you decide to audition on The X Factor UK even though there's an Australian version of the format?

That was the thing, I was ready for a new adventure and as I mentioned I'm half British and I've never really been to the UK. I visited when I was really small but I don't really know much about my UK heritage so I thought why not audition for the biggest show in the world, be on the world stage and also come and see where I'm from. It's so wonderful to see the cousins and family I haven't seen in 15 years. I was reunited with an aunty who I haven't seen for 15 years and we both started crying because it's that connection that I've been missing. I was really ready for a new adventure.

Q. Your family back in Australia, have they been watching you on the show are they supportive?

Yes they're amazingly supportive. They've been worrying as parents do and they were a bit hesitant at first, especially you know with things like theatreetc as perhaps job security isn't always there. My dad's a banker so it's very different but yes they're both so supportive. They've said 'it's a one in a million chance Sean' and I thoughtdo you know what, I'm that one in a million. I really believe in myself and I'm doing it so they're very happy about it.

Q. You mentioned on the show that you've been on a journey in terms of getting to where you are today and learning to accept yourself. What was the turning point for you?

Yes there wasn't just a singular turning point; it was more of a progress do you know what I mean? It was great to be in a theatre school which allowed me to express myself and understand who I was and understand my craft and who I wanted to become. It's also down to my amazing supportive friends and family. It's been a real progression and at the end of the day, it's about loving yourself and being like this is me and this is my authentic happy self. Once I was secure in that I was ready to share it with the world I was like that's it YOLO. In fact, that's my motto in life YOLO - You Only Live Once - and you better just go for it because you never know if you don't try. 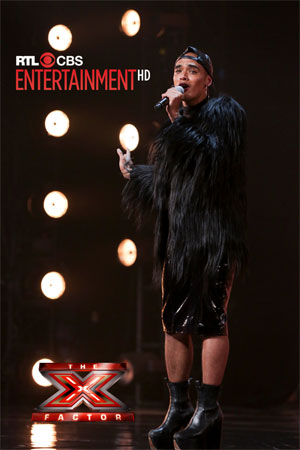 Q. Congratulations on your performance during the six chair challenge, it was incredible. When you were on the stage and you'd finished singing did you actually realise how fantastic your performance was at the time?

Thank you! Lots of practice and blood, sweat and tears went into that. Hours and hours of rehearsing and then it all comes down to that two minute slot - it's just crazy but that's how it is. I mean the lyrics of the song literally outlined how I was feeling 'you give them bright shining diamonds' meaning you have a chance boys but 'I will give you the world'. That's the thing with singing; it's not just about the singing it's about story telling. In this case, I related the song to what was happening in the six chair challenge. I used the boys and I was like 'bring it on' I'm ready to battle. I had my wrecking ball in my hand, my spikey shoes on and that was it. I want it badly and I was 'dressed to kill' so to speak.

Q. In light of that, is there anybody from the boys remaining who you regard as your strongest competition?

Well, when I saw Mason Noise perform I was like wow he's so talented. He just owned the stage not just vocally but performance wise you know what I mean? And it was really unfortunate what happened but I have a lot of respect for him as an artist I thought he was amazing. I think I probably regard myself as my main competition because I want to keep growing and getting better and better. Sean Miley Moore has more to give!

Q. Going forward in the competition, is there anything in particular that you're nervous about?

Yes, I mean Iknow I appear to be very confident on the outside and of course I want to remain as professional as possible but I am nervous. I'm using my nerves to my advantage however. I'm nervous as hell but I don't want to admit that because I want the judges to know I'm secure and confident. You always get nerves when you're a performer and it's when you lose those nerves that's when there's something wrong. I'm using my nerves to my advantage because that's what I've been taught to do.

Q. What kind of artist do you see yourself being in the future?

As of now I do love the older sounds. But I've just been listening to Sam Smith's song 'Writing on the Wall' and I would love to sing that. That's the kind of sound that I want to give as of now as an artist. Very epic, powerful, beautiful, delicate – I love the drama and the theatre of it, it's very me right now as an artist so fingers crossed I get to sing it.

Q. Final question, you mentioned Sam Smith there but is there anyone else you'd love to duet with if you made it to the live shows?

I'd love to sing with Judy Garland and have her projected sitting next to me. She's amazing. I come from musical theatre world so I love all those theatre greats - they're fabulous and the songs are romantic and gorgeous. I tend to gravitate towards the older stuff so I hope to be able to sing some of the classics.

RTL CBS ENTERTAINMENT is also available online via livestream on SKY On Demand if you are subscribed to the channel. WATCH NOW | KNOW MORE

Seann Miley Moore: Moving Forward to the The X Factor UK's Judges' Houses Round
Welcome, SKY Kapamilya!
We use cookies to improve your browsing experience.
Continue to use this site means you agree to our use of cookies
Tell me more!
×