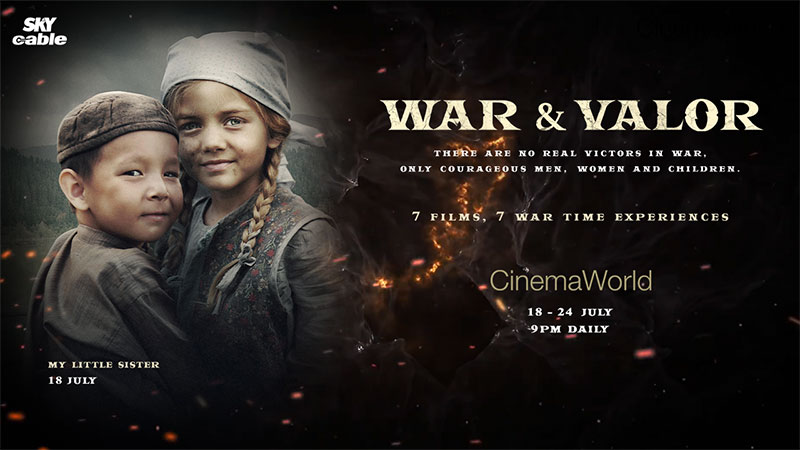 SKYcable presents movies about war and humanity from CinemaWorld this July

From July 18 to 24, SKYcable will bring viewers stories that offer hope and redemption as CinemaWorld channel presents "War & Valor", a curation of seven compelling films from around the world that reflect the harsh consequences of war and highlight people's valiant pursuit of peace.

Opening the seven-day festival on July 18 (Sunday) is the Russian WWII drama "My Little Sister", featuring the story of Yamil and Oksana. Despite their differences in culture and not being related by blood, the two children share a special bond amid the harsh reality of the ongoing war.

On July 19 (Monday), follow Leander, a former WWII official on his pursuit of finding the love he lost because of the war in "Leander's Final Journey".

"The Spy", which airs on July 20 (Tuesday), will reimagine the life of Vera Schalburg, the Second World War's most enigmatic spy, as a double agent during Nazi Germany's regime of terror. Afterwards, on July 21 (Wednesday), another war love story comes viewers' way with "My Beautiful Country", featuring the unlikely romance of a Serbian widow and an injured Albanian soldier.

Next on the movie line-up this July 22 (Thursday) is "Within The Whirlwind”, the true-to-life story of literary professor Evegnia Ginzburg and how she dealt with the hardships during Stalin's Great Purge in the 1930s. CinemaWorld then flies viewers to the terrains of Afghanistan with "Jirga", the story of an ex-Australian soldier seeking absolution from the family of a civilian he killed during the war, which will air on July 23 (Friday).

Finally, capping the week-long event on July 24 (Saturday) is the Norwegian animated film "The Tower", which highlights the true stories of Palestinian refugees in a Lebanese camp, as told through the eyes of an 11-year-old girl who learns of her family's home and dreams of returning to it someday.

Catch these stories full of hope and inspiration on CinemaWorld's "War & Valor" from July 18 to 24 at 9 PM.

SKYcable subscribers can watch the said international films in the comfort of their homes on CinemaWorld (channel 184 for Mega Manila subscribers; channel 716 for Cebu and Davao-based subscribers). Add CinemaWorld to your plan for only P150 a month via SKY Select. Visit mysky.com.ph/getcinemaworld for more details.

CinemaWorld channel presents "War & Valor"
Welcome, SKY Kapamilya!
We use cookies to improve your browsing experience.
Continue to use this site means you agree to our use of cookies
Tell me more!
×